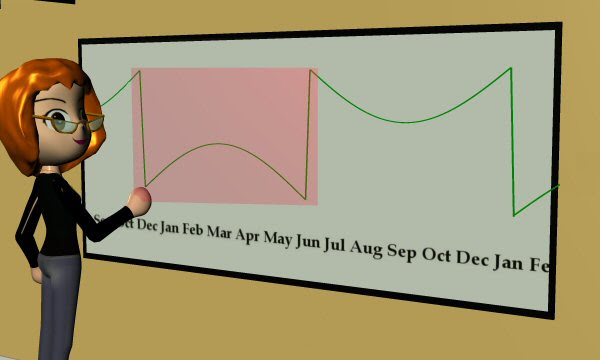 Spokane's seasons sometimes follow this pattern. Polistra is highlighting a period that includes last fall, winter, spring, and now the start of summer. Last fall dropped suddenly to serious cold; then winter sagged upward to nearly mean, with very little snow; then winter ended with another serious cold period. Now we're in an early peak of serious heat. Will summer droop down and continue the pattern? Remains to be seen. = = = = = Polistra isn't really thinking of seasons; she's only using this graph to continue her home-ec theme. Sacred math vs secular math. Sacred math serves the high priests of "science" but doesn't make it easy to handle patterns like this one. Secular math doesn't even try to handle a pattern like this. The real world often hands you a mix of integer patterns that need to be treated as integers and curves that need to be treated as curves. Both styles of math are inconvenient for such a mix. You can generally reach your desired destination, but the process is entirely too opaque and inappropriate. It's like trying to build a car with ice cubes, apricots and squirrels. The formula that generated this graph is y = ((-1)^int(x)) - (0.8*sin(x*pi)) Clumsy in two ways. First, you shouldn't have to use the powers of -1 trick to generate a square wave. What's really happening in a switch situation has nothing to do with -1 and nothing to do with powers. There should be a direct Square Wave function or Tick function. Second, there's nothing wrong with having a sine-type function, but it should be able to sync with the Tick without involving the irrational pi. Secular math should be more like Legos or Tinkertoys. There should be an obvious component for each type of event in a real-life pattern. You should be able to think: Pick up a Tick; pick up a Sine; turn the Sine so it sags the Tick. = = = = = Important sidenote: Home Ec and real-world math have received a big boost from the most courageous man in the country. Rev Jarvis, who spoke for God in calling down Supersatan Sharpton, has been steadily advocating for black small business. He CORRECTLY sees black business ownership as the best available solution to the current problems of the black community, and he CORRECTLY sees that real-world economics is needed in black schools to help train black businessmen. Basically he's trying to return to the pre-1965 situation when segregation made it possible for black business to PROSPER by serving black people. After 1965, the national movements toward Integration and Welfare and Free Trade and Open Borders and Outsourcing and Financialization and Environmentalism turned black men into criminals. All of those trends were created by the same people with the same goals: Squash the poor, enrich the Chosen. Those trends affected poor black men first and worst, but later ruined poor white men as well.