Sunday, March 18, 2012
'Deep pipes' This 'study' is all over the media. Nothing new about the subject, and as far as I can tell from the writeups, this 'study' partly misses the point.

Correlations between authority and speech patterns have been studied for a LONG time in speech research circles.

What's known: Authority correlates with low FORMANTS, not with a low PITCH.

The larynx creates the basic pitch: about 120 cycles per second for most males, about 180 for most adult females, about 300 for young kids.

But the laryngeal wave is not a simple sine wave by any means. The larynx opens briefly to let air through, then slams shut for most of the cycle.

Here's a schematic of larynx action with the resulting waveform below:

These repeated openings create pulses of pressure in the mouth; each pulse 'rings' the air cavities of the throat, nose and mouth. Those 'rings' are the real carriers of both meaning and feeling in speech.

Consider a woodwind instrument like a saxophone. The reed, like the larynx, makes a buzzing sound that has no particular character. The reed isn't what you hear; it only triggers vibrations in the tube and bell. The valves change the dimensions of the tube, which changes the note and timbre of the resultant sound.

Each person has a default pattern of those 'rings', based on the dimensions and shapes of your mouth, nasal cavity and throat. This default pattern is constant whether you pitch your voice high or low. When you move your tongue and lips into various positions for vowels and consonants, you're making further adjustments in the 'rings', technically called formants.

Easy proof: Whispering is just as understandable as voiced speech, even though a whisper has no pitch at all. (Or more precisely, it's white noise with all pitches mixed together.) And you can distinguish a male whisper from a female. It's all in the shaping by the mouth; the pitch of the larynx is just one way of triggering the formants.

NPR finishes off their piece with a brief sample of Obama singing an Al Green song in a high voice, with the implication that this tends to disprove or counter the 'study'. Not at all. Obama has confident formants, and those formants still come through when he tunes his larynx to a high note.

Bit later: After writing the above, I was looking for more good stuff by George Shepardson, whose 1901 'Electrical Catechism' inspired me a few weeks ago. I bought the printed version of that book and have been hungrily reading it, and now I want more! The first thing I found in Google ebooks was his 'Telephone Apparatus' from 1917. Started reading, and sure enough.... 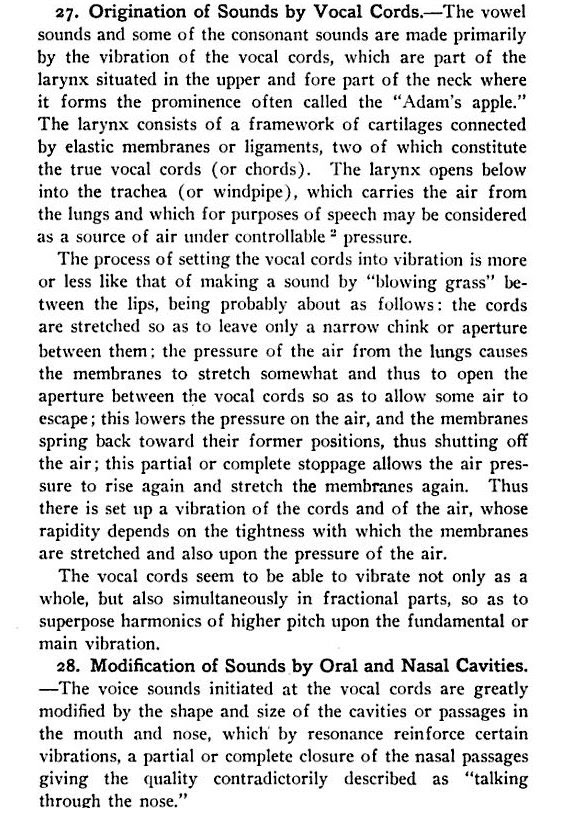 Shepardson's description of the speech mechanism is precisely accurate, beautifully clear, and superior to most modern descriptions. He got the pressure-based operation of the larynx exactly right. Most of the 'real' speech scientists at that time pursued a provably false theory that the vocal folds were directly vibrated by muscles; they didn't fully abandon the bad theory (i.e. they didn't all die) until 1970. Later, on p. 27, Shepardson covers the connection of emotional content with formants. Precisely right again.

Why did Shepardson disappear into obscurity? Well, I don't need to answer that, do I? Because he was correct and brilliant.