Sunday, October 07, 2012
Meta-meta-address Continuing from this item, I was thinking about the somewhat unusual layout of Avenues in Manhattan. Most midwestern towns have Streets going north-south and Avenues going east-west. (Less often vice-versa; but when you know the city's system, you can always tell which way you're going by the name.) The original townsite of Manhattan has Avenues (both ways) for wide section-line arterials, and Streets (both ways) for narrower, um, carriageways. (Can't think of a good generic term for all kinds of, um, paths-usable-by-pedestrians-and-vehicles.) Is there an official standard for street names and addresses? Turns out there is, and it does answer the generic-name question: Thoroughfare. The document is the Street Address Data Standard. PDF here. It's written in the same style as computer language references, even including a meta-syntax for symbolic references to elements of the language! Here's one part of the language reference: 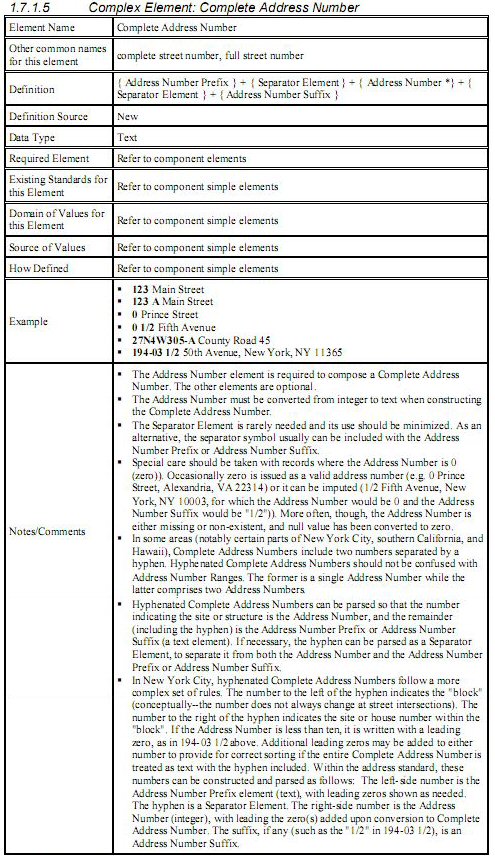 The document answers another question I'd wondered about. For a century, Spokane had used a unique 'Complex Address Structure' with no real justification. Instead of 123 W. Main, Spokane used W 123 Main. This was confusing to outsiders, which was pretty much the whole point. About 10 years ago the Post Office strongly encouraged the city to adopt the more common method. Was this just a typical exercise of power for power's sake? No, it was forced by the 'Street Address Data Standard'. There's no provision in the 'Complete Address Number Element' for a 'Street Name Pre Directional' that precedes an 'Address Number'. = = = = = A later musing on street addresses here.  ¶ 5:42 AM