Saturday, August 01, 2020
Ramblings about rotations. Random thought about real world math. Math courses have never done a good job with 3-dimensional thinking. There is no standard way of labeling three axes, and no standard way of labeling three rotational angles. Human bodies and senses are mostly 2D with a sort of tacked-on reference to the third. Birds need all three dimensions all the time, but land animals make very limited use of Y. There's a basic and incurable oddity in the math of three rotations, which most people don't notice because they don't have to deal with it. Astronomers and navigators (both ship and plane) and artillerymen and computer graphics artists do have to deal with this oddity or kink, and they've developed a variety of techniques for handling it. Here's the kink: When measuring or using three linear dimensions, you need all three, you use all three, and all three are fully independent and interchangeable. When measuring or using three rotations, you only need two, and you can only use two. Trying to incorporate the third angle in a measuring system, or a machine, or a computer program, causes huge confusion. Navigators and astronomers and artillerymen use only two rotations, and they have standard names. Altitude and Azimuth. You can accurately reach every point on the heavenly sphere, or the available sky and landscape, or the globe, with only Altitude and Azimuth. I'll use my reimagined Regnard telegraph to illustrate, since this is what triggered the pointless thought. Altitude is a rotation on the X-axis.

Azimuth is a rotation on the Y-axis. Seen from the front:

Azimuth seen from the side:

In a device built for the two 'real' rotations, the third rotation is not just unneeded but weird: 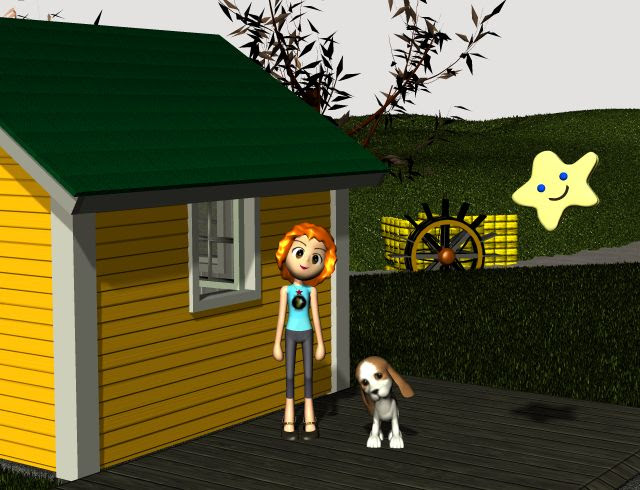 Our heads can tilt this way, and we have a separate circuit in the semicircular canals to handle this rotation. Our eyes twist slightly to keep an image upright when we tilt our heads, but they don't compensate nearly as well as they do in the two 'real' dimensions. Dogs and four-footed animals can also do the same tilt, and have the same semicircular and eye compensators, BUT they use a different set of neck muscles. When a dog tilts his head in puzzlement, he's using the same muscles we use for shaking No. Birds are more like humans, in this way and many others. Computer graphics programs use a variety of tricks to make the third rotation appear to behave consistently, but the tricks all fail at some point. Poser treats the 'body', representing the entire figure, as one movable object, and the 'hip', which ALSO moves the entire figure, as another movable object. If you want to use three rotations, you have to use the 'body' for two of them and the 'hip' for the third, or use the 'body' for one and the 'hip' for two. If schools paid more attention to the astronomical and graphical ways of handling the world, maybe this confusion would be a bit less surprising... but it's really intrinsic and unsolvable.