Monday, August 03, 2020
Not so silly after all A new measurement of the cerebellum is SHOCKING as usual.

The neurons of the cerebellum are 80% of the neurons in the brain, so it shouldn't be a surprise that its surface area is large. Also unsurprising: Science is snobbery. Scientists function by theory and tyranny. (Redundant and synonymous.) They have a POWERFUL disdain for people and animals who function by skills and culture and reality. The cerebellum is the site for SKILLS and REALITY. The cortex is the site for theories and tyranny. Thus everyone knows that the cortex must be INFINITELY larger than the cerebellum, just as everyone knows the scientist is INFINITELY smarter than the plumber or waitress. I made a rather silly analogy on this point two years ago: = = = = = START REPRINT: Reading some of the older pieces at the Abbeville website, and simultaneously working on courseware about the cerebellum.... 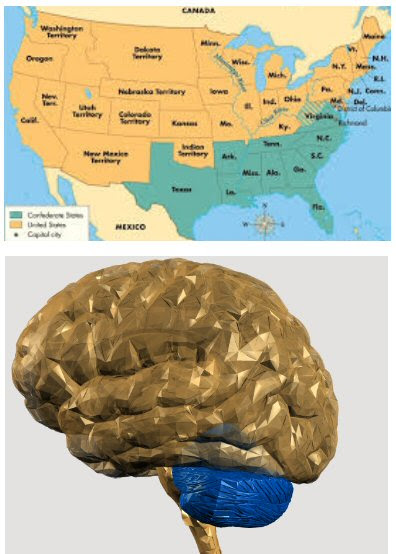 Dixie is America's cerebellum. Especially true before Madman Lincoln burned it down and killed 1/6 of the country to "prove" a totally delusional "point" and raise Wall Street share values. Dixieland is the source of African influence, bringing Natural Law and morality and rhythm and resonance and muscle memory. Yankeeland is the source of Euro influence (esp Kraut and Frog), bringing verbal "learning" and insane nonsensical theories and genocidal delusions and numerical abstraction. The Yankee cortex believes it can get along without the senses and muscles, so it constantly tries to exterminate the senses and muscles. Of course the entire body can't get along without movement. Dancing and walking and making and cleaning keep the organism functioning. When you hold still for long periods the cerebellum loses sync, and the cortex stops sorting and pruning its memories and ideas. Delusions such as "rights" and "democracy" and LBOs and QE and Bitcoin run wild, destroying the organism along with everything around it. = = = = = END REPRINT. Maybe it's not so silly. Where is the tyranny now, and where are the sane and courageous non-tyrant governors? Most of the courageous non-tyrants are in the cerebellum, where people and skills matter. Florida, SC, Georgia, Tennessee. The worst holocausters are on the west coast, in the frontal lobe of the cortex. Aside from all that, let's go back to the point of the referenced article. Neurologists are just now realizing that their measurement of the SURFACE AREA of a brain part that has been identified and mapped and measured for hundreds of years was WILDLY WRONG. If they can't even measure a macroscopic SURFACE AREA after several hundred years of working with it, why in the fuck should we trust them to measure ANYTHING AT ALL? Hint: CASES and DEATHS.