Tuesday, June 09, 2020
Pigeons and Pigeoneers I was deeply impressed by the Signal Corps approach to pigeons. From the 1923 Signal Corps Tech Manual:

The pigeon is highly sensitive and responsive to treatment. Of great importance in this respect are kindness, firmness, and calmness of the personnel handling it, and the reward given the pigeon for good performance. The pigeon prizes its home, and every effort should be made to increase the attractiveness thereof by proper loft construction, management, and the maintenance of buildings and grounds.

The Corps understood that pigeons are intelligent conscious animals with souls. Pigeons, like humans, want to be useful, want to work and accomplish a purpose. The pigeoneers knew all of their pigeons by name. Pigeons lived and served for up to 10 years, so the acquaintance was deeply personal. When a pigeon carried out its duty in extreme danger, it was commemorated by name. 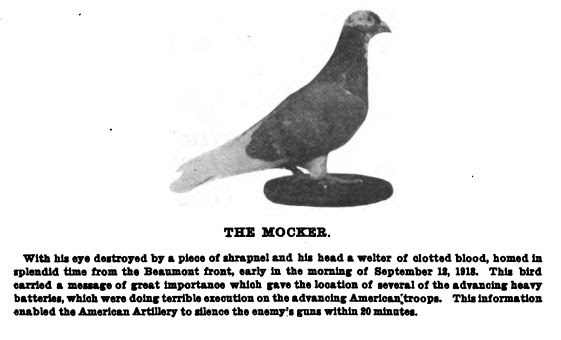 Transcribed: With his eye destroyed by a piece of shrapnel and his head a welter of clotted blood, homed in splendid time from the Beaumont front, early in the morning of September 12, 1918. This bird carried a message of great importance which gave the location of several of the advancing heavy batteries, which were doing terrible execution on the advancing American troops. This information enabled the American Artillery to silence the enemy's guns within 20 minutes. Mocker wasn't callously killed after his heroic deed; he recovered, retired, and lived at Fort Monmouth until 1937. = = = = = The Signal Corps also understood several physical aspects of birds that scientists were just starting to "discover" 50 years later.

The ear appears to play an important part in the sense of direction. It includes three parts, the external ear, the middle ear, and the inner ear. At the top of the inner ear there are three semicircular canals which appear to be the nerve conductors of orientation. It is possible that their great sensitiveness enables the pigeon to perceive magnetic and atmospheric impressions, and to determine the direction of the loft, either at departure or during the flight, when on account of atmospheric disturbances the bird has temporarily lost its way.

Birds are blimps! Another case where we copied Nature without knowing it.

Not only do these air sacs constitute a source of supply for the lungs, but the warm air which fills them increases the buoyancy of the pigeon in the air and reduces the effort required for propulsion.

And the Army also cared about the pigeoneers, and took care to select and retain them:

A careful selection must be made of pigeoneers to train and care for a loft of long-distance pigeons. The pigeoneer should have had several years of experience in other lofts, and have a marked aptitude for judging flying birds. He should be given training under another pigeoneer experienced in long-distance work until he has demonstrated his ability to train and select long-distance pigeons for himself. He must keep pigeon records meticulously, culling and eliminating unsatisfactory stock, and developing finer stock as he deems best. A qualified pigeoneer should not be required to maintain a loft containing over 50 long-distance pigeons. With these he should become intimately familiar, learning their individual characteristics in detail. He should cater to their peculiarities to bring out their best abilities; as for example, upon the return of a bird from a long-distance flight the pigeoneer assists the exhausted bird to his own perch or nest, dislodging any intruder if necessary. He should be allowed considerable latitude in exercising his initiative and developing his own ideas in regard to his birds.

This is DRAMATICALLY different from the scientific approach to both pigeons and humans, developed by Skinner at the exact same time. Most scientists have continued in the Skinner mode, treating both pigeons and humans as passive identical inanimate mechanisms. The previous SOULFUL view is just starting to return in the last few years ... but only for other animals, not for humans. = = = = = Since pigeons were a form of communication device, and since pigeons are unquestionably patient by my peculiar standards, I decided to run up some of the Signal Corps pigeon equipment. First a stationary loft. These weren't manufactured by the Corps; each group of pigeoneers was expected to build its own from plans. On the left is a bob trap, a simple one-way entrance. Pigeons landed on the perch, then walked in through the swinging door. They couldn't get out again until the pigeoneer launched them.

On the right is a drop trap, nothing more than a hopper with holes. Pigeons came in for a landing and swooped in through the holes. The trap was then closed manually after all the expected flights had returned. = = = = = Here's a trailer loft, which was manufactured. Each trailer loft was driven to a location near the action but not at the front lines. After a week or so, the birds learned to treat the trailer as their homing point. 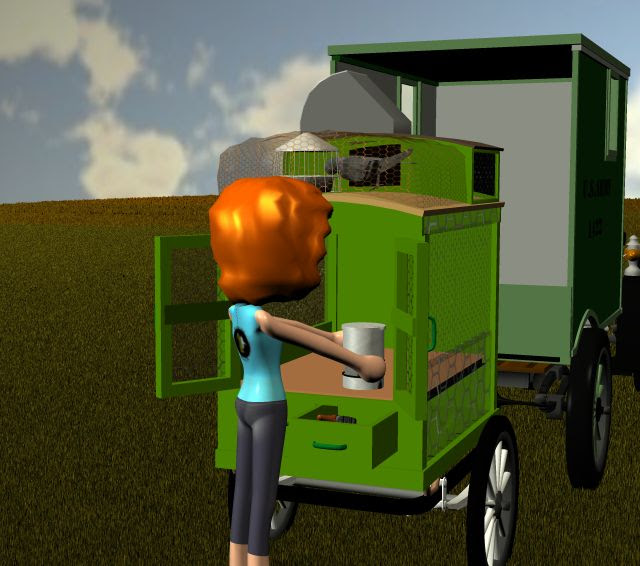 = = = = = As with the semaphores, I have an ulterior motive for featuring pigeons. Even after radio was mature and easy to use in WW2, there were times when radio silence was necessary. Pigeons carried the message without stirring up the ether. Like dogs and horses, pigeons clearly have a sense of duty and mission. The pigeoneers appreciated this sense and used it respectfully. Unlike dogs and horses, we've never used pigeons for good. We've always abused their sense of duty for war. Traditionally dogs and horses have helped us to find and cultivate our own food. Dogs helped us hunt, and got part of the meat as a reward. Horses helped us farm, and got part of the grain as a reward. Natural Law at its best. Use employees to create good value, pay the employees from the profits, respect the souls of the employees. Pigeons have served armies for thousands of years, but never carried messages for productive enterprises. Maybe it's time to reverse the old trend. Continued here with a few more pix and details.