Monday, February 03, 2020
Acetylene world 5: patient automation Continuing the acetylene theme. Automatic warning buoys were powered by acetylene for a long time. Canada used them best, and the best inventor was Canadian. Thomas Willson spent his life inventing and improving lights. He succeeded and got rich. Later he tried to diversify and failed:

In 1911, he began experimenting with the condensation of phosphoric acid in the manufacture of fertilizers at a mill on Meech Creek within the park. Due to this venture and running out of capital, he lost nearly all of his estate to his creditor, American tobacco king J.B. "Buck" Duke. In 1915, he died of a heart attack in New York City while trying to raise funds for a hydroelectric project in Labrador. His dream was finally realized in 1974 as the Churchill Falls project.

Should have stuck with acetylene. NYC is lethal. = = = = = His automatic buoy was a beautifully patient mechanism, with no gears or software or wires or moving parts. The sea water itself was the only moving part, and the elegant feedback resulted from the nature of the carbide reaction. Here's the buoy as seen from outside: 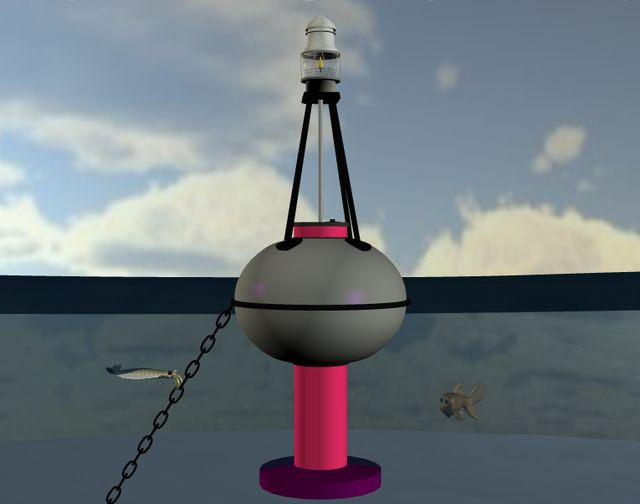 It has an air-filled float in the middle, anchored to the seabed. The long cylindrical chamber containing carbide passes through the float, with a counterweight or ballast at the bottom. A hole in the ballast admits water from below. Acetylene gas produced by the carbide reaction flows through a pipe to the lamp on top. (The lamp is standard, not inventive). The basic problem: You can't let water surge in and soak all the carbide. You'll get a huge explosive reaction and use up the material fast. You need to expose just enough of the carbide to feed the lamp. Willson's just enough solution starts with this screen or sieve near the bottom of the chamber: 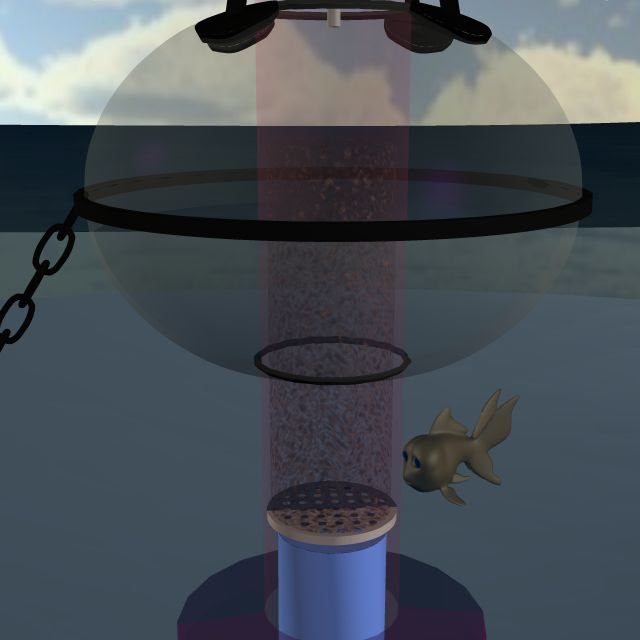 Raw carbide rocks can't drop through the screen, but water can pass freely. Looking at the action in two stages: Before considering the feedback, here's the input variable. Tides and waves move up and down relative to the buoy because the buoy is anchored. The water inside rises with the input motion by hydrostatic pressure:

Now we add the feedback. When the water rises, more carbide rocks are bathed by water, so they start reacting and producing acetylene. The gas pressure above the water increases, pushing the water back down. Result: The water stays low, contacting only the rocks that are 'fresh' and ready for reaction. (I'm exaggerating for visibility. Negative feedback tends to keep the controlled variable steady, so in reality you wouldn't see much movement.)

Best feedback of all: The slaked lime after reacting is slushy, not solid, and gradually washes off and falls down through the sieve, so the lower part of the solid rockpile is always fresh. No need for human intervention to clean the 'ashes'. The Willson system worked splendidly and efficiently. The Canadian government found that they could visit each buoy to reload once a year.