Tuesday, September 12, 2017
Globalism = digitalism, extended Yesterday's entry about Natural Law and TRUE/FALSE ties in with an earlier and broader thought on Globalism and Digitalism. = = = = = START REPRINT: Localism needs modular analog systems, so localists develop modular analog systems. Globalism needs centralized digital systems, so globalists develop centralized digital systems. = = = = = Globalists love systems that DIGITALIZE a naturally analog process, because these processes allow a small entity to gain control without using energy. How do you digitalize a smooth input? In mechanical or neural or electronic arrangements, you need a SNAPPER. The device must sense when the input reaches a THRESHOLD, and abruptly SNAP the output to the opposite position.

A simple switch shows the principle. Happystar is moving the lever smoothly, and when the lever hits the contact point the current flows to the meter and lights. When he pulls the switch back, current stops flowing as soon as the lever leaves the contact point. In more modern systems, switching is done by an amplifier or valve with 'too much' gain. (See Pluponents.) An amplifier is like a valve. The input is turning the faucet up and down, which takes very little strength; the valve controls a large flow of water or current, with much more strength in the resulting pushes.

One way of getting a switch-like response is to increase the gain or LEVERAGE, so that the output flow quickly reaches its positive and negative limits, and spends very little time between the limits.

A digital stage is efficient in a certain sense, because it spends very little time in ambiguity. For a transistor or a human, ambiguity takes more effort. We can quantify this fact for the transistor or valve. When the valve is OFF, there's no flow, so no power. When the valve is FULLY ON, there's plenty of flow but no turbulence or friction, so no power is used up. In between, you have non-zero flow with non-zero friction, so more power is wasted. We can't figure watts for a human, but experience tells us that the same principle applies. When you are totally committed to a mission or a job, all of your mental energy goes into the mission. When you are not doing a task at all, no energy is wasted on the task. It's the midrange that leads to burnout. When you're supposed to carry out a task but you've lost the belief that it's worth doing, you're exhausted by the turbulence and friction of doubt. = = = = = Globalists want each person and each country to be totally committed to a single task for maximum efficiency. If your task is supplying oil to the empire, supplying oil is the ONLY thing you can think about. If your task is building smartphones, building smartphones is the ONLY thing you can think about. You can't doubt your SINGLE purpose in life. Graybill's Law. = = = = = In complex human systems like corporations and banks and governments, LEVERAGE is accomplished by rules and habits. Instead of a contact point, the government tells itself to make a decision at a specific setting of the input variable. The action is now software, not hardware. Laws are full of such decision points. Majority voting, guilty/not guilty jury decisions, the all-or-nothing electoral college, omnibus bills with poison pills, tax brackets. In each case the lever is moved by a small force, and a large flow of power turns on SHARPLY at the threshold point. From the viewpoint of a ruling tribe, the big advantage of digital software is the LEVERAGE, the HIGH GAIN of this oversaturated amplifier. Small power turns the valve, and the valve opens an infinite flow of money or military power. Software leverage works only when people believe that it works. This means that the small entity must FIRST acquire the tools to impose belief... as the entity under discussion unquestionably did. (Hollywood, TV, publishing.) After the whole system is switched to software, physical reality is no longer relevant. No limits, no material inputs, no labor, no humans. QE, derivatives, infinite leverage. = = = = = Modularity is also a crucial part of an analog system. Nature REQUIRES it in complicated systems. Look at an old radio circuit: 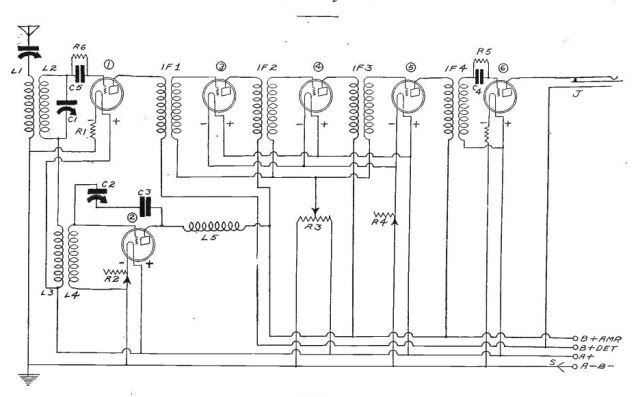 Each stage pulls power from the same source and does its own thing. Some amplify, some detect, some filter. Only processed signal is transferred between stages. Transformers insure that no direct current can pull each stage out of its preferred operating conditions. Now look at an old national circuit from the same decade: 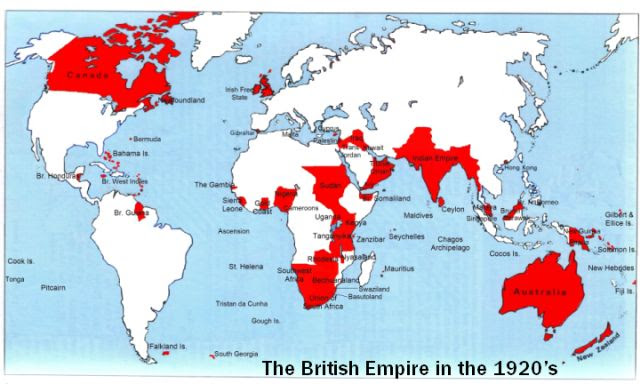 An earlier less toxic form of globalism. Each module pulls power from sun and rain and does its own thing. Some grow wheat, some grow cattle, some cut logs, some mine iron, some turn the logs and iron into machines. Only processed product is transferred between stages. Borders insure that no direct migration can pull each stage out of its preferred operating conditions. = = = = = Modern globalism doesn't allow modules for the same reason that it doesn't allow analog responses. If each nation or city can make its own decisions, the ruling tribe has no LEVERAGE. With a single-knob control for the entire world, all decisions by the ruling tribe can be propagated instantly everywhere. See Libor, WTO, EU, fractional-reserve banking. Modern "nations" are thus built without transformers. All coupling is OPEN to DC and AC of all frequencies. You can't protect your own manufacturers by halting the import of manufactured products or cheap labor. You can't protect your own farmers by halting cheap produce. You can't protect your own people by halting the import of criminal migrants. You can't protect the culture of your own tribe from the media force of the ruling tribe. The non-human parts of Nature won't let you design a physical system this way. We have been FOOLED into thinking that human nature will let us do it. Clearly it doesn't work. An amplifier that receives 200 volts DC along with the 0.2 volt AC signal will burn out. A nation that receives 200,000 criminal migrants along with 2 useful migrants will burn out. = = = = = How do we return to analog control and modular organization? As mentioned before, we need to start by recognizing the situation. Genes exist. Ethnic groups are different. Modularity requires at least some division by ethnicity. Digitalized legal systems make it too easy for one tribe to control everything with little expenditure of energy. Analog legal systems, based on quantified recompense and revenge, provide a NEGATIVE FEEDBACK LOOP which gives more control to the non-rulers. = = = = = END REPRINT. In that piece I was talking about the enforcement of decision points but I hadn't yet seen that the simple concept of TRUE/FALSE is anti-natural. Now I see it. Analog legal systems are based on a Natural Law understanding that you can't reach justice through digital TRUE/FALSE. You have to apply a restorative negative feedback to bring the situation back to equilibrium. Often the restoration leaves the disruptor technically "unjudged", but the important goal is the equilibrium, NOT the technical statement of guilt.