Sunday, February 07, 2016
Soviet profit Repoofs and tech tyrants continually repeat the mantra Taxation is Socialism. I'm terminally tired of this shit. I already had my eyes opened to Soviet reality in the realms of tech and education. Our shared image of Soviet economics is probably just as wrong. Specifically wondered about the Soviet approach to savings and profit. Did workers have money to save? Did they like to save? Did they get interest on savings? Did the Soviet system have room for profit and self-employed craftsmen? Info is surprisingly scarce. I could only find part of the answer, in this 1968 US document. Written, oddly enough, by the Census Bureau. A fairly complete picture of Soviet economics as of 1968. = = = = = 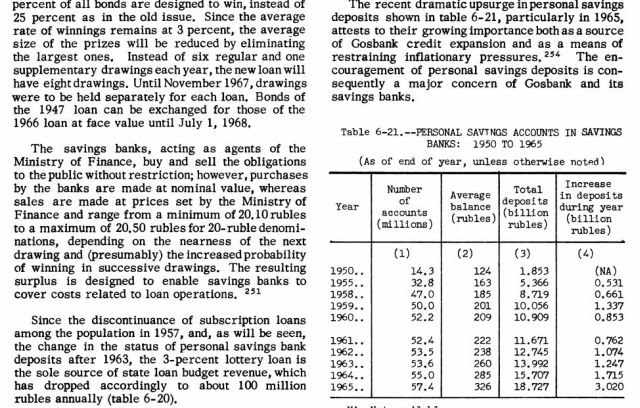 This page hits the savings question. Yes, workers did have money to save and they liked to save. But interest rates aren't mentioned. Apparently the Personal Savings Banks operated like the long-extinct US Postal Savings system. The banks bought treasury bonds and 'retailed' them to savers, keeping a fraction of the interest as profit. They also provided money-order service and small loans. = = = = = 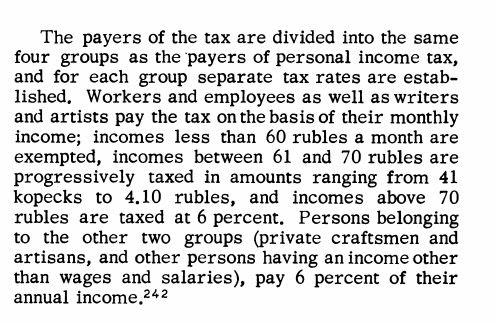 This page gives a taste of the personal income tax, which was not the primary source of revenue. Rates preferred married with children, just like US taxation. Also note the provisions for self-employed artisans. They did exist, but tax policy tried to discourage them. NOTE THAT THE TOP RATE IN THIS SYSTEM IS 6%. Our TYPICAL tax burden in 1968 (after typical exemptions) was around 10%, and our TOP RATE was 75%. In other words, TAXATION IS CAPITALISM. Banking by businesses had to run through branches of the single National Bank (Gosbank). Gosbank was both bank and accountant, with authority to audit any business that seemed to be getting shady, and to shut off credit to a business that was failing. (Equiv to our bankruptcy.) Stroybank was the Soviet equivalent of the stock market. Stroybank allocated capital investment to major enterprises, so it was the main instrument of central planning. Businesses were expected to earn a profit on operations. A VAT tax on profit was the main source of state revenue, which encouraged the state to plan in the direction of profit for most businesses. When an enterprise was engaged in innovation, it was explicitly freed from the need for profit until it had production up and running. 20 years ago the above paragraph would have sounded hopelessly tyrannical to me. Now, after direct experience in LBOs, and after watching tech tyrants like Martin Shkreli and Tim Cook, it sounds pretty damn good. Any business that tried to overprice necessities, or offshore its labor away from Russian workers, would have been shut down HARD.

As I've noted endlessly before, our Soviet agents brought us an 'export model' of communism, which was designed to destroy us. They succeeded magnificently. The better part of the Soviet system was kept internally, which is proper governmental behavior. We could use some of this better part right about now. = = = = = Later note on sources: I found a better source of info on savings and pensions, with even more surprising disproofs of our standard prejudices.