Saturday, November 14, 2015
Temple Lane Still pissing around with maps, still another Manhattan mystery. Semi-solved, or at least semi-guessed. Most likely wrong, but I'm having fun so fuck it. Here's what I remember from the early '60s when I was driving around town a lot: The SE corner of town was the City Dump. Its boundaries were rather indefinite, fading down into the river on the east and slopping over to 4th or 5th on the west. The city map indicated a little road called Temple Lane, heading south from the west end of the City Dump. I tried to find it once, and remember the image clearly. Temple Lane went south for a few blocks and ENDED at a big old brick mansion. The mansion was wildly out of place in this abandoned area, accessible only through the Dump. Looked haunted. Later my memory was oddly verified by a novel that used this haunted 'mansion at the end of the world' as its location. At the climax of the novel, the river flooded and tore the horrible mansion off, with considerable screaming and so on. This '40 map doesn't show Temple Lane. I'm sure it was there, though maybe not named. The map does show where the real end of town was; I've highlighted those lines with blue, and added Temple in orange. 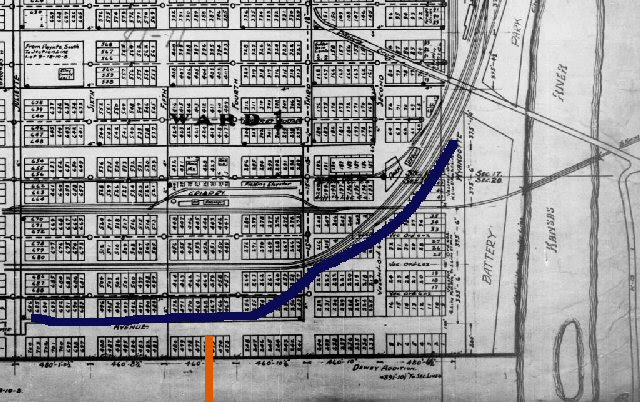 Now back to the present. Top view by Bing. The south end of town was completely redone in 1970. A levee was built and Pottawatomie Av, formerly just a theory, became an active industrial and commercial street. There's Temple Lane, and there's the mansion. 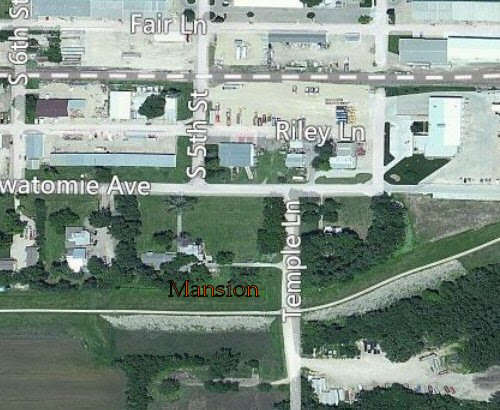 Front view by Googlestreet, driving on Pott Av. Perspective drastically lengthened by Google; the previous map shows the driveway is about 100 feet long. Unquestionably the same mansion I saw in 1965 and the same mansion shown on the 1885 map, though it's been renovated with an added porch. An old brick mansion is highly unusual around Manhattan; nearly all the surviving old stuff is limestone. 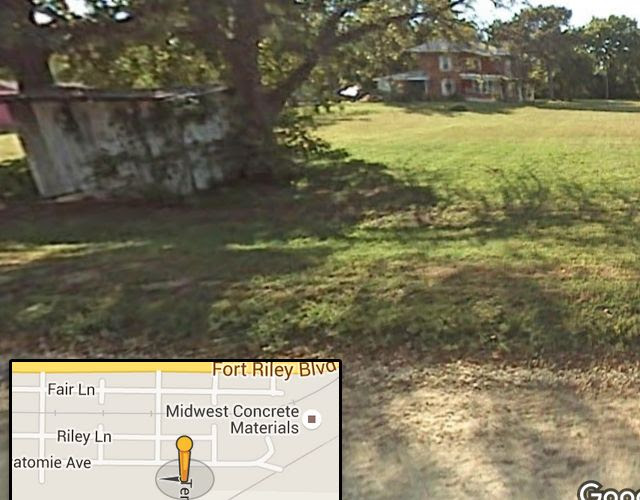 Temple Lane goes on and on through the old floodplain of Hunters Island, past farmland with a few rural houses that date from the '20s or so. You'd never know this was a mile from downtown! Clearly not haunted, but not eagerly sought by developers either. Manhattan has grown TREMENDOUSLY in the opposite direction, not at all to the south. Maybe floodplain rules prevent development because this is beyond the levee line. 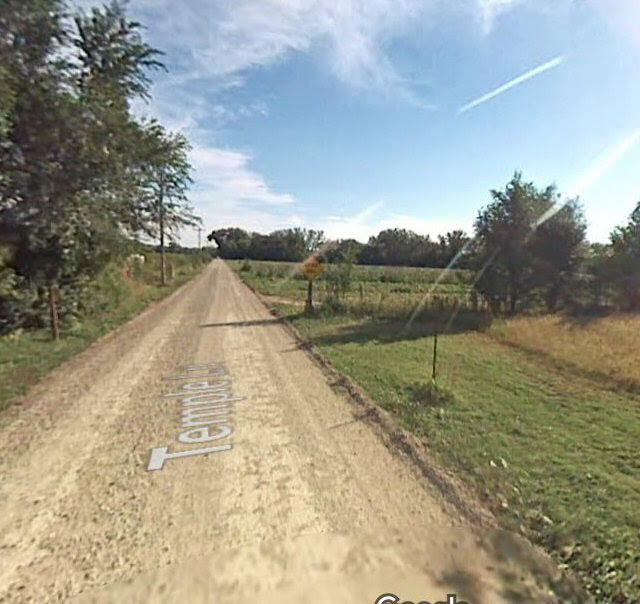 Two hypotheses. I've built a stupid BlinkyGif with the current top view, then Hyp 1 added in orange, then Hyp 2 in violet. Bear in mind that Pott Av and all the industrial stuff wasn't there.

Hypothesis 1: (orange) The mansion's long driveway must have been a whole lot longer before 1970, because it had to reach all the way to Riley Lane (blue). Possibly the driveway was treated as an extension of 5th St. At that time Riley Lane wasn't named; it was just the 'drivable version' of Pottawatomie. I would have been driving on Riley Lane. I would have seen the two-block driveway and assumed that was Temple Lane. The real Temple Lane, perhaps just an unmarked set of ruts, was there but I didn't notice it. Hypothesis 2: (violet) Maybe the driveway and Temple weren't separate intersections. Because the east end of Riley Lane was pretty much the end of Manhattan, maybe the mansion's driveway led to the mansion then branched off to Temple Lane. Unlikely. = = = = = Later addendum, not especially helpful.... Found a couple of USGS topo maps, one from 1950 and one from 1965 or so.

This blinkyGIF gives a better sense of the 'informal' roads around the City Dump. Green arrow points to the mansion, violet arrow to the Mexican restaurant discussed here. Looks like I must have turned onto 'drivable Pott' aka 'Riley Lane' from Manhattan Ave, and then 'drivable Pott' turned into actual Pott, most likely without the clear corners shown on map. At the point where Temple Lane turns south, you're in the Dump. = = = = = June 2017 addendum: The chimney was the remnant of a steam flour mill.