Monday, November 02, 2015
Coulda had a literal V8, Joe. Still reading book on Soviet limos, leading to broader thoughts ... A couple of notable Switchovers. Symmetry between Russia and America on slavery. Both countries got rid of serfdom in 1861. Madman Lincoln did it by genocide, killing 7% of the country and destroying vast amounts of farmland. The black slaves were left worse off than before, still on the same plantations which were now much poorer than before, and without their previous guarantee of lifelong security. Tsar Alexander 2 did it without violence. He bought out the landlords, then converted the feudal rent arrangement to a mortgage. Each peasant could automatically keep 1/4 of the land he was working, and could pay off the rest in 20 years. It was messy at first, but after 20 years it worked reasonably well. The peasants who were capable of running their own farms were doing it, and the others either worked for the capable peasants or found something else to do. In the 1920s the situation was reversed. Henry Ford finally freed the slaves from the plantations, and Stalin violently turned his peasants back into total slaves via the First Five Year Plan, leading to a famine that killed 4% of the population. (Couldn't match Abe, could you? Ha ha ha. We're Exceptional! USA STRONG! USA STRONG! USA STRONG!) It didn't have to be that way. In the '20s, the Putilov factory in Leningrad was building Ford tractors under license. This was followed by a complete Ford plant, built and managed by Ford men, in Nizhniy Novgorod. The factory was intended to build A's in great quantities, but it didn't work out. From an excellent account by Boris Shtopov:

It was caused by economic and organizational factors, common to all Soviet economy during the Industrialization decade, and, especially, in the First five-year plan. .... The assembly line technique and machinery were established in the very beginning, and it was required "to draw" to them other factors and conditions of manufacturing. To accomplish it was extremely difficult, because the Government fixed quotas on every description of supplies, financing, deliveries, etc. Haste, vanity only depressed normal work. It became necessary to stop or reduce production to a minimum to remove omitted or arisen malfunctions, to wait delivery of missing tools, spare parts, materials etc. The company specialists had but limited responsibility – to consult and supervise adjustment of the machinery and to help in starting-up of the factory. The social-political climate in the Soviet industry was a mix of enthusiasm and fear. The political police, local Communist party structures and union leadership were very influential, and their suspicion towards engineers, as a part of intellectual class, “intelligentsia”, was evident. Moreover, strong professional jealousy had risen between Russian and American engineers. The Russians were proud of their theoretical knowledge, while Americans stressed the importance of practical experience.

Shtopov lists all the differences in a table: 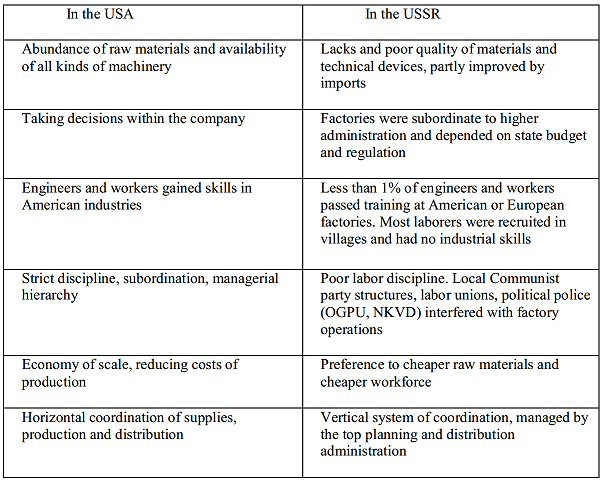 Perfectly switched now. Complete trading of the two sides. It's too bad Stalin didn't simply follow Ford's PRACTICAL SOCIALISM, which could have been rebranded as Communism without losing face. Ford had already solved the problem of inexperienced peasants and unreliable supply chains. His PRACTICAL SOCIALISM in fact turned America into the working MAN's paradise. We've abandoned it now, choosing instead to follow genocidal Kraut THEORIES. Stalin emulated Lincoln. Smash the country to enforce a genocidal Kraut THEORY. All sorts of red flags there, but Stalin taped over all the idiot lights and roared ahead. = = = = = Later update: After Stalin died, the Soviet system did move closer to Fordism.