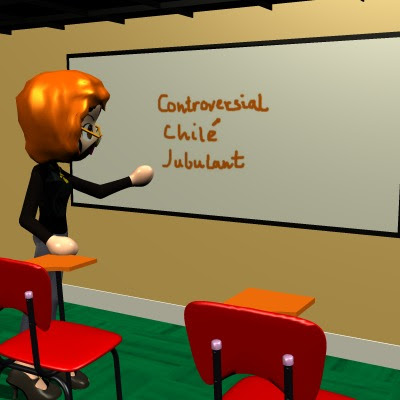 Professor Polistra brings in a new load of misused or mispronounced words.

Ask as a noun:

"How heavy a lift is this ask?"

"Pakistan is ignoring our asks."

Means a common-sense and factual belief shared by 100% of AMERICANS, and violently opposed by 100% of journalists, government officials, educators, and religious leaders. Controversial is actually a euphemism for heretical. All government officials, educators and religious leaders are permitted to shoot, burn, or banish anyone who holds a controversial belief.

"an independent, vibrant state of Palestine, living in peace with Israel" -- Obama doing the Peace Process crap. (Prof Polistra wonders why every President feels obliged to run this Peace Process, since it never goes anywhere. Why do they seek a guaranteed failure?)

"Human rights for all is vital to a vibrant community..."

Vibrant is a euphemism. A vibrant community is a place where white people aren't safe.

In vitro for in utero.

Dennis Miller interviewing an author who travels a lot: "You pretty much exited the womb and hit the road, eh?" "Nah, I already had a few frequent flier miles in vitro."

Understandable confusion, since "in vitro fertilization" is a common phrase referring to the same general vicinity, while "in utero" is a rare phrase.

Prof P doesn't see the reason for this one. Appears to be a transfer from turbulent, but turbulent isn't more common than jubilant.

is usually pronounced Plentay, rhymes with Partaaaayyyy! Again no conceivable reason, just a habit passed among the elites.

Noticed during the recent earthquake and mine disaster. Another one of those idiotic foreignish pronunciations like Copenhawgen or Pawkeestawn. Putting the accent on the last syllable always sounds more foreignish even if it's not supposed to be there. (More charitably, this could be a stupid back-formation from Chilean.)

Later: Chilé is even spreading to the peppers, which of course should be chilis. In this NPR feature about the "grand dame of Mexican cookery", the announcer says chilés every time! Classic example of hypercorrection.

Not new, but another annoying example of our idiot insistence that Foreignish always has the accent on the last syllable. Natives pronounce it EE-raq. Especially annoying when some 'illiterate' American happens to say EYE-rack, and a 'literate' American "corrects" him to ee-RACK. Both wrong. We didn't always pronounce it in Foreignish, though. Before the Satanic Bush family (damned be their unholy name) forced America to fuck around in Iraq to guarantee our national destruction, Iraq was just one of those mysterious Oriental places, and literate Americans pronounced it EE-raq.

Example in this one-minute MP3 segment from a 1939 Info Please broadcast.