Monday, June 04, 2012
Are we really smarter? 1 As I was mowing the yard that I planted last year, feeling a burst of pride for hard work leading to pleasant results, I looked closely at the clover blossoms for the first time. Each one has a set of little spikes; in some cases the spikes are all pointing up, and in others about half the spikes are pointing down.

Checked the web, found this simple and clear explanation.

What looks like a blossom is actually a cluster (inflorescence) of a few dozen tiny florets. Each 'spike' is a complete little flower, with a green cup (calyx) containing a white crown (corolla).

Why are some pointing down? Those are the florets that have already been touched by a pollinating insect. The clover detects the touch and removes nutrition from that floret, allowing it to drop down and turn brown. 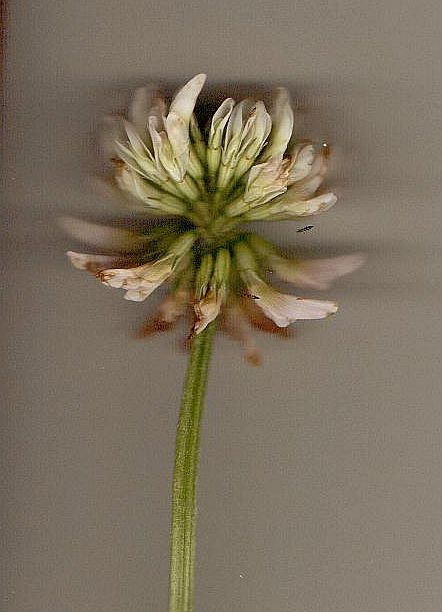 Result: The bee only pays attention to the white upward-pointing crowns, which are exactly the ones that still need her attention.

Amazingly smart design. Not as 'muscular' as the alfalfa blossom with its bee-slapping flap on top, insuring that each bee gets dusted with pollen. But still a useful motion in response to a sensed stimulus.


Can we call this intelligence? The legume's smartness is entirely alien to the complex and varied smartness of vertebrates, and it doesn't involve neurons and ganglia. But it gets the same job done.

Inside our brains, neural pathways that are likely to lead to fertilization and survival stay on top, and paths that will no longer attract a pollinator tend to wither and droop.

For both clever clovers and profound primates, this sorting mechanism, keeping the good stuff and dropping the bad, was pre-designed. The intelligence is in the blueprint. In other words, we think we're numinous but we're just leguminous!
Continuing the main thought in the next piece.= = = = =Artistic note for Poser types: I packaged the clover blossom figure, bee prop, and a cloverleaf figure not used in the animation. The ZIP unpacks to a Poser runtime in the usual format.