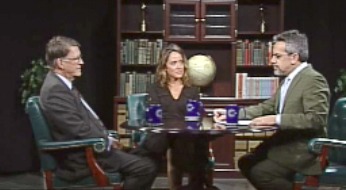 Here is a highly revealing discussion on the subject of electing judges. The moderator managed to avoid talking points and bring out an important opposition between two types of politics.

On the left is William Baker, a retired state judge who is pushing some kind of weird Ethics Commission. In the middle is Erin Shannon, an attractive and highly articulate spokesman for a trade group representing builders. On the right is the moderator John Postman, a columnist at the Seattle Times, I think.

Baker advanced the delusional civics-class notion that judges are non-political and perfectly impartial technicians who shouldn't be elected, or if we must have the "necessary sin" of election, their election should somehow happen without campaigning. He couldn't explain how to run an election without campaigning, but he knew that was the only ethical way to proceed.

Erin Shannon knocked down every one of his arguments with clear and comprehensible facts. She showed repeatedly how her trade group had campaigned for judges who support the state constitution and opposed judges who oppose the state constitution, and told the story of other states that had eliminated election only to find that appointed judges were vastly more corrupt.

Her most important point: Aside from corruption, appointed judges lose track of the real-world consequences of their decisions. They are free to follow various pointillist theories and abstractions, free to float away from the plain purpose of constitutions and laws. Elected judges must face the people who are affected or killed by bad theories. The people don't understand the theories, but they do understand the difference between good and evil, the difference between normal people and criminals.

Baker finally realized that he was defeated and began referring to Shannon in a passive impersonal way, looking only at the moderator, treating Shannon as a document in a filing cabinet which must be carefully censored for public consumption. She continued to speak to him person-to-person, and he became more and more uncomfortable.