Friday, February 05, 2021
Three follies that aided science (part 4 of 4) Following part 1 and part 2 and part 3. Saved the best for last. Colonel Ned Green was the most influential of these three men. Money talks, and intelligently-directed ENJOYABLE money talks best. His mother Hetty Green was the equivalent of Buffett. She was generally called the Wall Street Witch. She started out rich and manipulated her rich inheritance up to super-rich. (In modern terms, from $100M to $4B.) Her main multiplication resulted from Madman Lincoln's issuance of high-yield bonds and cheapened currency to run his genocide. Hetty maintained a nominal residence for the family in Bellows Falls, but she actually lived in her NYC office. She didn't enjoy the money, and didn't spend any of it to help her two kids enjoy life. She died when Ned was 48, so he made up for lost time. He enjoyed luxury, and equally enjoyed generosity. His brief try in politics seems to have happened before the inheritance; presumably he had some control of family money at that point. He didn't inherit Hetty's vicious grasping greedy demonic NYC evil, so he was outclassed and outfoxed by the real politicians and gave up. He got interested in wireless and became an active experimenter. He understood radio deeply, both the technical and marketing sides. He didn't invent any new technology, but he had solid judgment and knew which developments were worth financing. (In general, editors and selectors do more good than inventors and designers.) Here's his 'summer home' and the WMAF studio as seen in the WMAF booklet: 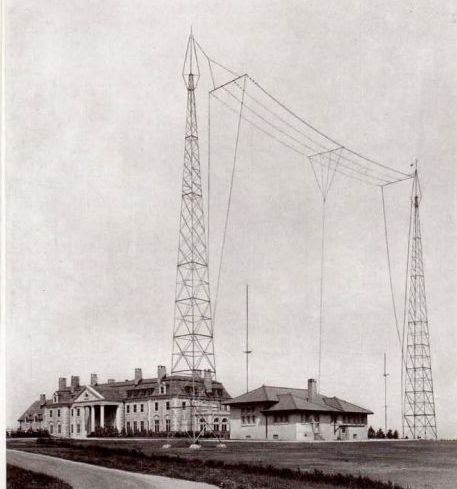 I haven't tried to model the mansion. I've done the studio, the water tower with speakers, and his unique electric runabout with radio equipment. Here's the overview of my version: 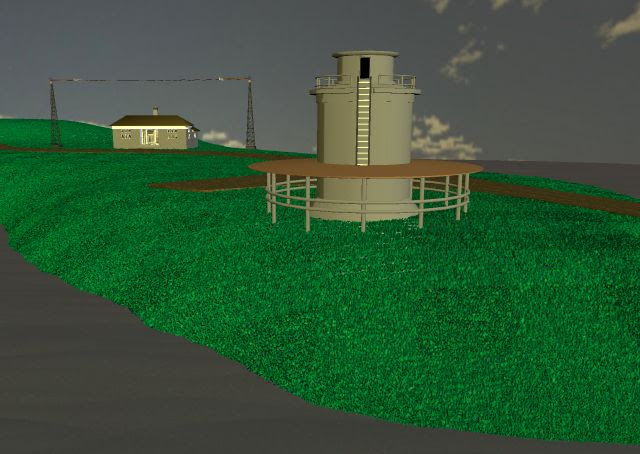 The speakers were designed as drive-in radio, so neighbors who didn't yet have wireless could drive up and listen. The water tower, not the studio, was the sourdough starter for MIT's massive research installation at Round Hill. Parallel to Trinity House's seeding of acoustic experimentation to break through fog, the water tower was the 'beacon' for foghorns. MIT then built a high-voltage lab for Van de Graaff, which morphed into linear accelerators for atomic power; and the fog research blossomed into weather radar research. His custom-made electric runabout was equipped with a direction-finding receiver so he could locate the boundaries of his station's output. 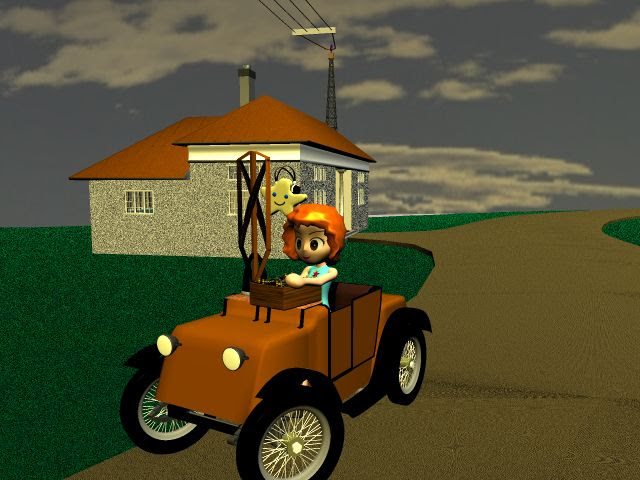 Colonel Green's generosity with his property and equipment, plus a whole lot of wisely-planned money, helped to give us nuclear power and modern weather forecasting. That's a pretty damn big footprint. More importantly for the future, Colonel Green showed how to use money and science for enjoyment and entertainment. He was not entertained by politics, probably because it was too much like his mother's Wall Street megalomania. He found that he was entertained by luxury and technology, and wanted to spread the joy.