Sunday, February 14, 2021
Little salute to Olivetti Reading these Italian electronics mags reminded me of the long and noble history of Olivetti. Another old company that respected its employees and treated them like humans, creating beautiful products and a beautiful city. An outstanding innovator, building the first desktop programmable calculator. (Not quite a PC because it didn't have text.) Here is one early effort by Olivetti, a 1908 'wearable' voltmeter. Polistra shows how it fits with the lid closed: 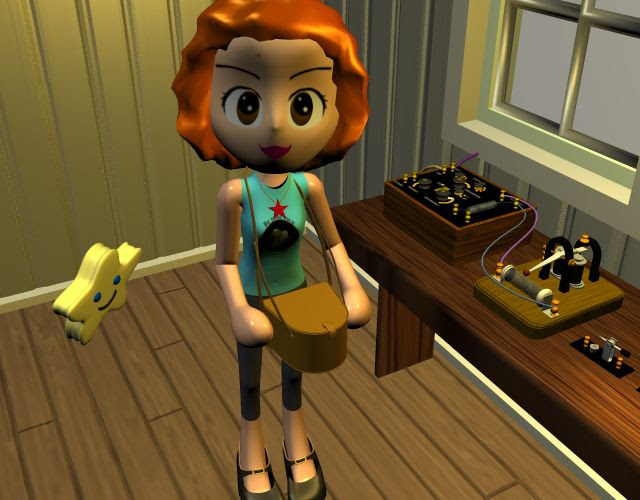 And how it was used, measuring a period-appropriate receiver: 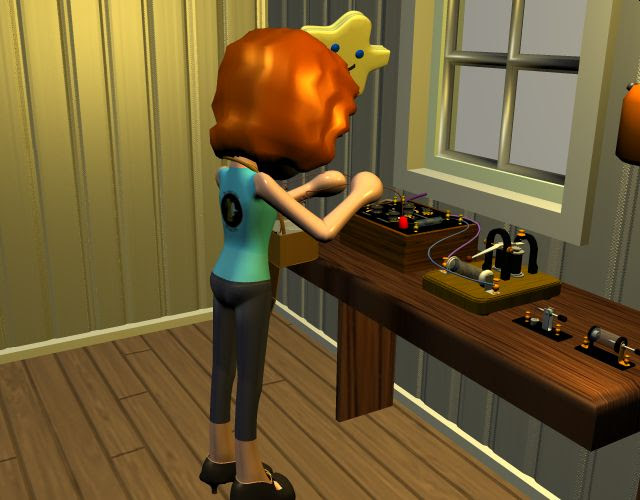 And the view from her eyes:

Finally, here's the 1964 Programma itself, along with a Summa adding machine that I modeled several years ago. The Programma was a difficult shape to form up, but there's not much action worth animating.... 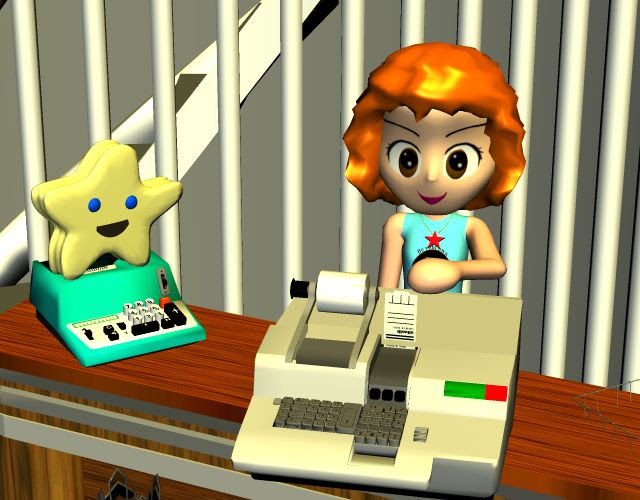 The magnetic memory cards were inserted in the slot below the keyboard, flowed over the tape heads, and popped out of the top slot. Note that the top is sort of split-level, with the left side higher than the right. I had a hard time figuring this out from the available pictures, and it doesn't seem to make sense. You can see that the wall on the left side of the card spillway is higher than the wall on the right side. Why? Possibly ergonomics. If the top was flat, with just a hole in the middle, you'd put books or coffeecups on top and block the exit slot. The uneven spillway protects the slot from blockage. You won't accidentally put a coffeecup there. = = = = = Random language thought: The original meter said VOLT, so that's what I put there. Since Alessandro Volta was Italian, you'd think the Italians would give him more credit. But would the plural be Volte, strictly from his name, or Volti, since tech words are usually masculine/neuter? I guess they skipped the issue by following the German practice of using singular for all measurements. Answered later: In 1854 they did use the plural of Volta's own name:

= = = = = Somewhat less random observation: The Italian mags in the '70s show clearly that multimeters and other measuring tools were the Italian specialty at that time. Ads for receivers and transmitters were mainly Yank and Kraut, Hammarlund and Grundig. Those meters were well ahead of US products in capability, and also had a definite style. This 1908 meter shows the same strength and style. Now I'm wandering through older Italian tech books from 1840 to 1900, and the same focus on metrology is present. So it's appropriate that Volta and Galvani are the most recognizable Italian names in the field. Marconi was from Italy but moved to England when young and did all of his work there. The name of Marconi is now quintessentially English in the same way that Edison is American. (I wonder if the Italian government regretted letting Marconi leave? Did they try to entice him back? ) Continued and expanded the theme here.