Sunday, September 13, 2020
From an extremely different era 12 Project Cold Rain was a successful cloud seeding operation, designed and executed by the Air Force in 1971. Texas was experiencing a serious drought, so the Air Weather Service in Texas decided to do something about it. The above sentence is incomprehensible. It appears that an AGENCY OF THE GOVERNMENT, working together with CLIMATOLOGISTS and COMPUTER MODELERS and engineers, decided to use government power and scientific intelligence to SERVE THE PEOPLE AND IMPROVE THEIR QUALITY OF LIFE. Bizarre beyond belief. Why in the world would GOVERNMENT and CLIMATOLOGISTS do such a hopelessly weird and pointless thing? Fortunately we no longer allow such primitive horrible behavior. In 1975 all climatologists were re-educated to serve Gaia, loyally slaughtering the people and reducing the quality of life to literal ashes. But for the sake of argument I'm going to humor those neanderthals and pretend that they were doing what they claimed to be doing. By their weird primitive standards, did the project work? Yes. = = = = = They first made some basic and obvious decisions. There's no point in trying to induce rain when there are no clouds, or only wispy cirrus clouds. You need to target a cloud that can make rain.

The cloud turret should possess a well-defined updraft region with a measurable liquid water content. A seedable cumulus congestus tower as it appears from the window of an approaching aircraft is pictured in Figure 1. 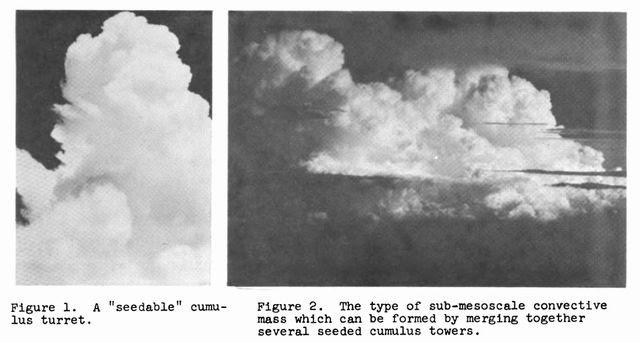 Their specific goal was the exact opposite of the hail cannons I've been discussing. The Grandinifughi are breaking up an updraft circulation to avoid the formation of hail. The Cold Rain cloud seeders were encouraging updraft circulation.

Even if a cloud meets all of the above requirements, the success of the seeding operation is not assured. A further important requirement is the necessity of having adequate knowledge about the atmospheric temperature and humidity profiles in the target areas. From these, with the aid of appropriate numerical cumulus modeling, it can be determined beforehand whether the buoyancy gain imparted to the turret by the seeding will be sufficient to overcome the braking forces imposed both by environmental thermal stability and by the entrainment of drier outside air into the turret body. Of even greater potential importance than seeding to promote the growth of individual cumulus towers is the possibility of seeding to induce the merging of several towers growing in near proximity to one another. Within the present day state of the art, the ultimate achievement in dynamical cloud seeding is to form a large, sub-mesoscale, cumulonimbus mass (Figure 2) which has the ability to regenerate new cells and sustain itself for a long period of time. The rainfall from such an intertwined system of towers is considerably greater than that which might occur from the same number of individual towers possessing independent circulations.

Note 'present day state of the art', indicating that they knew seeding worked, and were trying to refine the methods. They used Air Force planes for the 'bombing' and photography:

They designed and built silver-iodide flares, and a mechanism to load and release the flares. 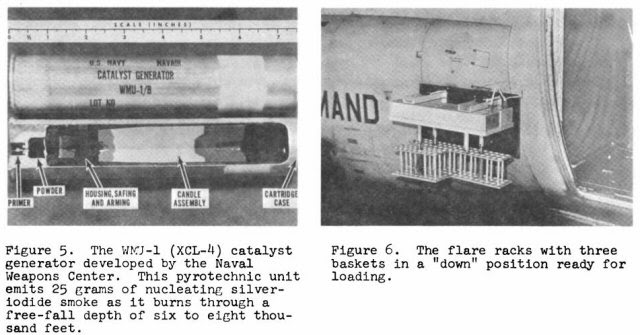 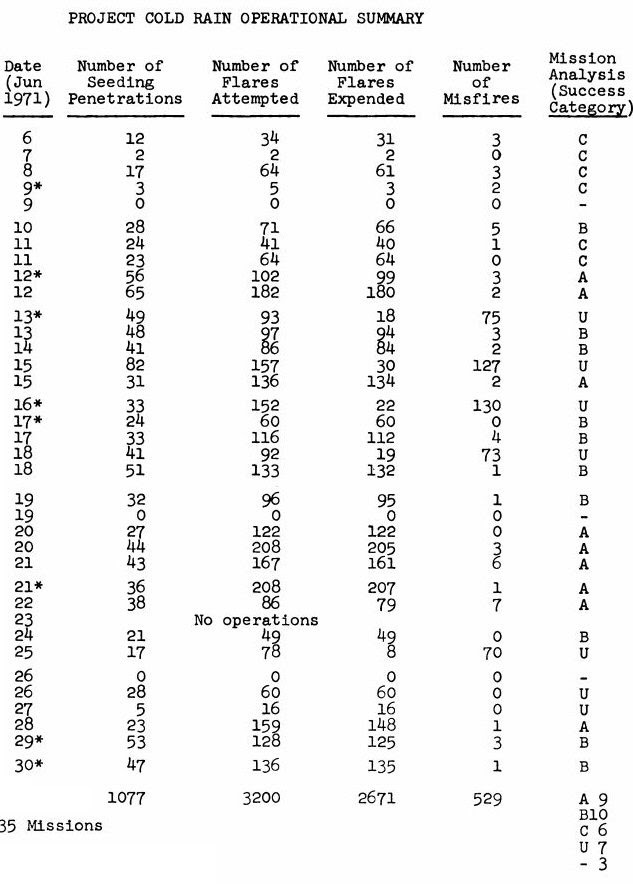 They applied Constants and Variables properly. In the table, A means that likely clouds produced substantial rain, which wouldn't have happened without the seeding. B means likely clouds produced rain, but nearby unseeded clouds also rained. C means the clouds didn't yield any rain. U means undecided. (It appears that most of the undecideds were because the flares didn't fire.) Out of 35 tries, 19 produced rain, of which 9 were definitely caused by the seeding; 6 definitely failed; and the rest were unfired flares or aborted. Stripping out the misfires and aborts, they actually seeded a cloud 25 times, and got rain 19 times. Yes, it worked. 1971 was 50 years ago. Nixon had just created EPA, but obviously the agency hadn't yet acquired enough power to prohibit such primitive horrible LIFE-ENHANCING research. Math footnote: Each flare held 25 grams of silver iodide, about one ounce. Each mission dropped about 70 flares, which is about 4 pounds of powder. Not a whole lot of material for a significant result! I always had the impression that seeding required tons of material.