Thursday, April 23, 2020
Personal Equation Machines In discussing the splendid Elgin Observatory, I was especially tickled by the Personal Equation Machine. = = = = = Rehashing: The astronomer was also calibrated occasionally with a Personal Equation Machine. The PEQ Machine had a domesticated star that moved at a known rate across a small transit. The domesticated star clicked eleven contacts when it crossed the eleven lines on the transit, and the astronomer clicked "simultaneously". This yielded an average reaction delay, and the variability of reaction. Equation of Time referred to any calibration curve between sun time and sidereal time, or a clock versus sidereal time, or Personal reaction time versus sidereal time. In the era when standard time was still competing with sun time, Equation Clocks and Equation Watches were fairly common. How was the result of these Equations used? The same telegraphic clock that marked the chronograph also drove sounders in the adjustment workshops of the factory. Each watch was adjusted until its ticks exactly matched the telegraphic ticks. = = = = = Elgin even used the PEQ Machine in its advertising: 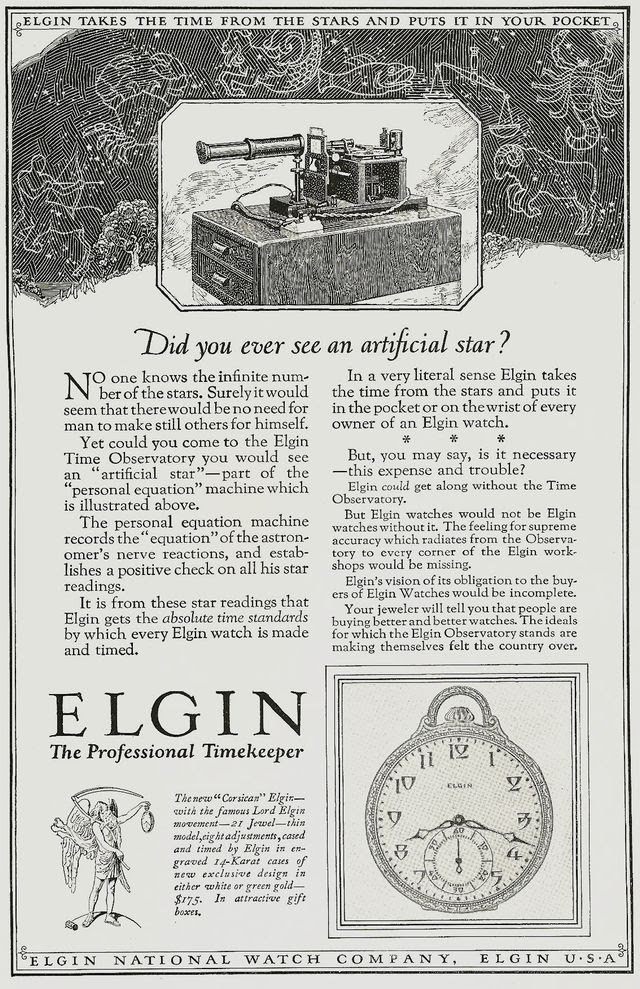 PEQ Machines (simulators in modern terms) seem to have been homemade by each observatory, not manufactured. The available pictures are all different, and look like the sort of thing you'd slap together if you had clockmaking skills and a junkbox full of lenses and gears and pivots. 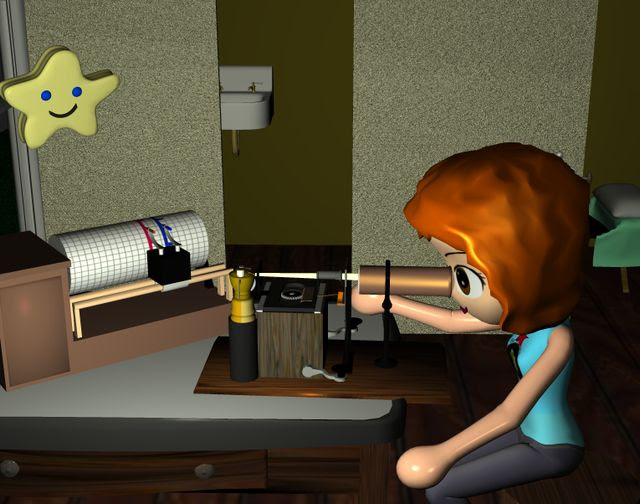 So I used my own graphic junkbox in making this one, which closely resembles the Elgin version. 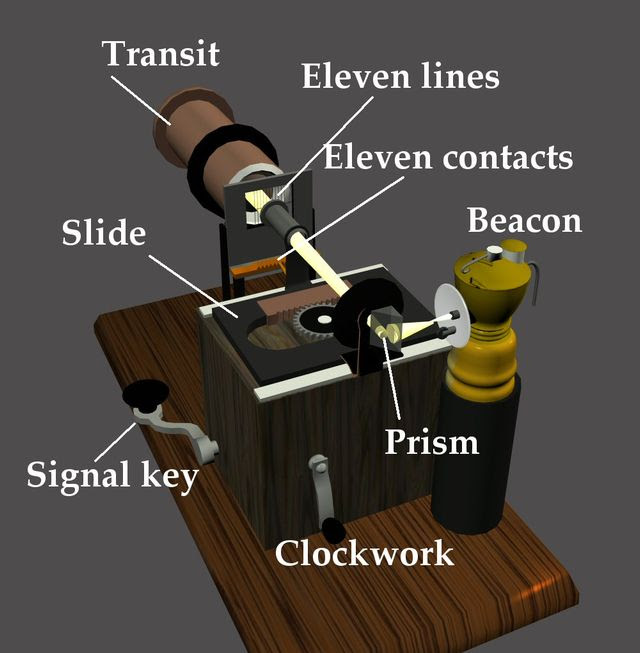 First, naturally, an acetylene beacon. Acetylene was the purest light, closest to starlight, and it was also the least dependent on external pipes and wires. The light from the beacon is bent by the prism and then constrained and focused by a shield and focus tube. These pieces all ride on a slide that runs back and forth at a fixed speed, driven by some form of clockwork. The moving beam, simulating a moving star, slides past the eleven-line grid, just as in the real transit. A contactor on the slide sends current to eleven breaker points simultaneous with the eleven lines on the grid.

The Person, again simulating the real star-transit experience, taps the signal key each time she sees the star hit one of the eleven lines. The chronograph receives the impulses from the contactor and the key, and displays both sets of clicks on the smoothly moving graph paper. Using these clicks, the astronomer calculates her Personal Equation, a curve showing the typical response delay and more importantly the variability of delay. If your delay wasn't close to constant under various conditions, you weren't qualified to measure real star transits. = = = = = Links for the Ancestral Clocks set so far: The magnificent Ridhwan Clock dance Crude water clock Observatories The Elgin observatory The Riefler Personal Equation Machines More Elgin stuff