Wednesday, April 15, 2020
Elgin for Equipoise After seeing a picture of the Elgin Observatory and realizing the building still exists, I had to animate it. Because it's a National Historical Landmark, there's a document with history and floor plan. Here's the building from outside. 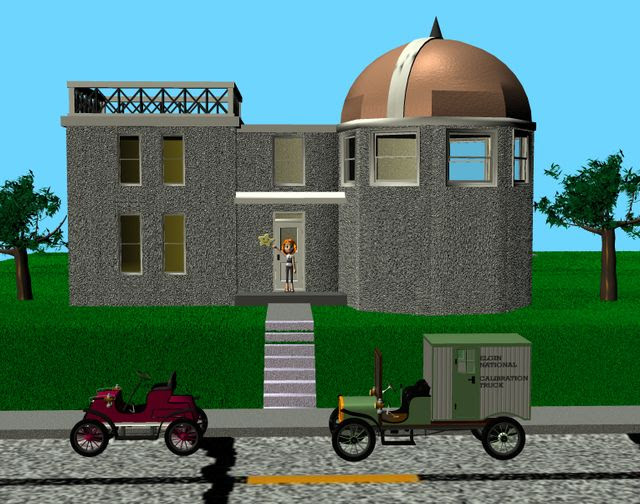 The architect was making a specific point in the alignment of the parts. He wanted the building to shout the company slogan: Elgin takes the time from the stars and puts it in your pocket. You can't really hear the shout from this view, but it's clear from a floor plan: 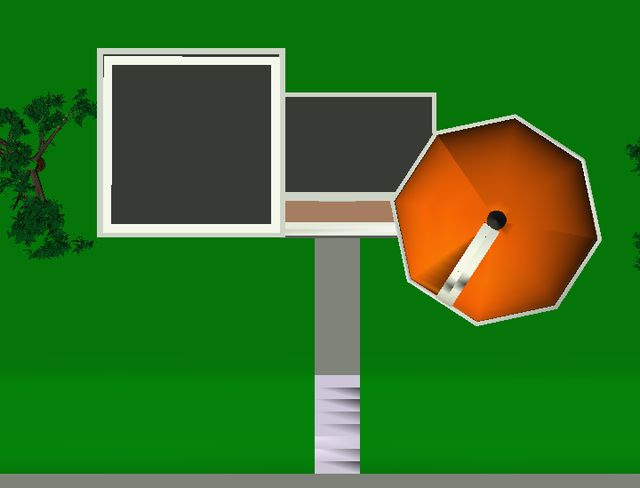 The octagon is out of sync. Octagons were common in 1910 buildings, and carpenters were accustomed to octagonal towers. If the architect had wanted maximum cost-cutting, he would have aligned the rest of the building to make 90s and 45s with the octagon. Or even simpler, a square building with the octagonal dome sitting on top. 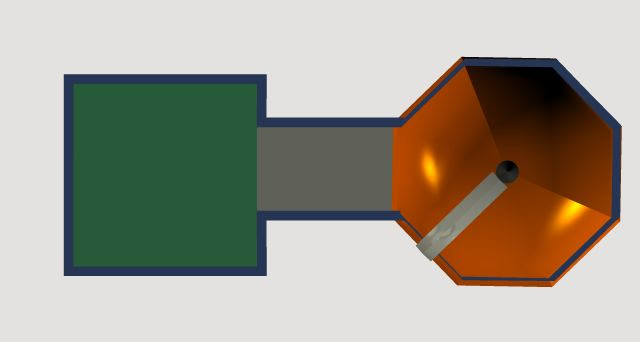 But he didn't want Economic Efficiency. He wanted to express the company's soul. He aligned the building with the streets, and aligned the dome to true north. The dome doesn't rotate, and the telescope within doesn't rotate. Strictly speaking it's a transit, not a telescope, because its sole purpose is to calibrate the transit of a star across a set of vertical lines. It's firmly attached to the earth with a 60 foot deep concrete pier, slightly separated from the building structure to avoid vibration. Elgin had a full-time astronomer, and a sleeping office for long nights: 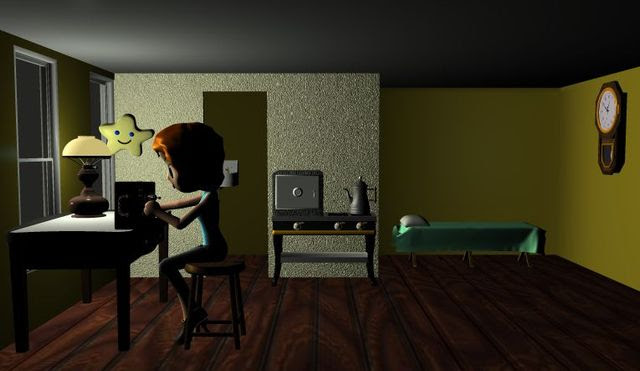 Checking time by the stars was an active subspecies of metrology, with its own peculiar techniques and instruments. All unfamiliar to modern eyes including mine, all gone now. Astronomer Polistra is observing her favorite star:

Note the telegraph key. She is clicking every time she sees the edge of the chosen star cross one of 11 vertical lines on the transit lens. These clicks make marks on the chronograph or plotter, which is also marked every second by the standard clock nearby. After this observation, the relative alignment of the star-transit marks is compared with the ticks from the clock. Standard almanacs and calculations yield the exact sidereal time when this star should transit this lens on this date, so the local clock can be adjusted each night to keep it in line with the stars. The astronomer was also calibrated occasionally with a Personal Equation Machine. Wonderful name for a simple gadget.

The Personal Equation Machine had a domesticated star that moved at a known rate across a small transit. The domesticated star clicked eleven contacts when it crossed the eleven lines on the transit, and the astronomer clicked "simultaneously". This yielded an average reaction delay, and the variability of reaction. Equation of Time referred to any calibration curve between sun time and sidereal time, or a clock versus sidereal time, or Personal reaction time versus sidereal time. In the era when standard time was still competing with sun time, Equation Clocks and Equation Watches were fairly common. How was the result of these Equations used? The same telegraphic clock that marked the chronograph also drove sounders in the adjustment workshops of the factory. Each watch was adjusted until its ticks exactly matched the telegraphic ticks. For a while Elgin competed with the National Bureau of Standards, sending the telegraphic ticks to WDAP (later renamed WGN) in Chicago. Like WWV, the ticks skipped a beat at :59. WDAP broadcasted a couple minutes of the ticks several times each day. = = = = = Elgin followed the same Social Economics creed as Ford and Conoco and NCR and Weston. Watchmaking, even in mass production, requires special talent and training, so Elgin wanted to keep its employees loyal and contented. Elgin paid its workers well and provided recreation and medical care. Young single employees could stay on campus in a comfortable hotel. Elgin protected and preserved accurate measurements, and protected and preserved the skills of its workers. Beautiful. Perfect opposition to all modern shit, perfect balance. Equipoise. Continued and expanded here.