Monday, June 24, 2019
Answering one question, opening another The American Radio History library has added a collection of newsletters issued by the Scott company, which made the fanciest and most expensive radios from the '30s to the '50s. Scott got into shortwave in '32, before the main trend in '34. So the newsletters focused on foreign stations and foreign owners of Scott receivers. From the May '33 issue, here's a poignant letter from a German owner. 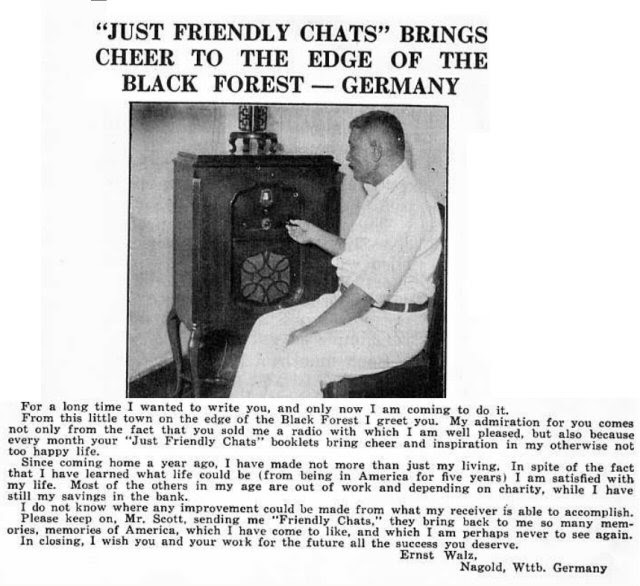 For a long time I wanted to write you, and only now I am coming to do it. From this little town on the edge of the Black Forest I greet you. My admiration for you comes not only from the fact that you sold me a radio with which I am well pleased, but also because every month your "Just Friendly Chats" booklets bring cheer and inspiration in my otherwise not too happy life. Since coming home a year ago, I have made not more than just my living. In spite of the fact that I have learned what life could be, (from living in America for five years) I am satisfied with my life. Most of the others in my age are out of work and depending on charity, while I have still my savings in the bank. I do not know where any improvement could be made from what my receiver is able to accomplish. Please keep on, Mr Scott, sending me "Friendly Chats", they bring back to me so many memories, memories of America, which I have come to like and which I am perhaps never to see again. In closing, I wish you and your work for the future all the success you deserve. Ernst Walz, Nagold, Wittenberg

We typically think of the Weimar time as hyperinflation, but in fact the hyperinflation was fairly brief and was replaced by deflation. Ernst verifies this by saying that he's living on savings, giving him an advantage over others of his age. In deflation, saved money automatically gains value. We typically think that ordinary Krauts were happy with Hitler. This letter would probably have been written in March when Hitler was consolidating his power. Ernst is not happy about the change and not sure if he will be able to leave. Ernst doesn't say why he decided to return a year earlier after spending five years in America, where was able to afford a fancy Scott. Was there a forced return order, or a false promise of prosperity to returning Germans?