Saturday, February 16, 2019
Uncle Tom's Macula It seems surpassingly odd that cars are valued primarily on one peculiar Newtonian variable. Linear acceleration. Uncle Tom McCahill gave us the standard measurement for linear acceleration, the 0-60 time. Obviously there is a minimum baseline for car value, plus some other minor factors like perceived quality and visual drama. But the McCahill is what counts most. As McCahill approaches zero, price approaches infinity. Price = BASE + (2K * COOL) + (5K * DRAMA) + (100K * (1/MAC) ) This formula holds true from Duesenberg to Tesla. Must admit I've NEVER understood this variable. When I was driving regularly, my absolute consistent goal was to minimize acceleration, minimize wear, and maximize economy. I rarely exceeded 45 MPH, so 0-60 wouldn't have been a usable measurement even if I'd wanted to achieve it. For the vast majority of car buyers, the McCahill is what counts. The McCahill is mediated by one tiny sub-organ within the inner ear. 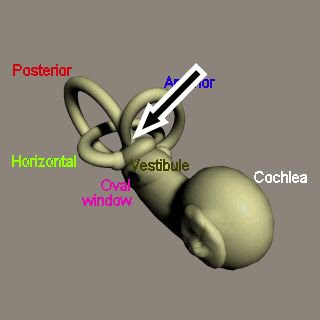 Here's one cochlea. The loopy things are the semicircular canals, which measure linear and rotational acceleration in all directions. Linear forward-backward accleration is mainly handled by the macula of the posterior canal, pointed by the arrow.

Movements of the body and head cause inverse movements of the fluid in the canals, as the fluid inertially tries to remain static. Inside the macula, a few miniature pebbles (otoliths) are embedded in a sort of gel, which drives some specialized hair cells. As the body jerks backward and forward under the influence of linear acceleration, the heavy otoliths slop forward and backward, creating a signal in the hair cells. So the value of a car is determined by a microscopic pebble-filled gel sloshing a few hairs around. = = = = = Sidenote: Hair-cell gel was a popular product for the designer of sensory circuits. See this new finding of gel as modulator in the auditory part of the cochlea, and gel as radio receiver in radio fish.