Wednesday, September 05, 2018
Wow. Still learning about railroad stuff while 'making' models. I wanted to do a semaphore-type signal, so I found this 1908 book on the subject. Actual serious WOW, not sardonic Elon-wow. I'm perfectly stunned. Flabbergasted. Bamboozled. Knocked over. There was an entire world of electrical and electronic concepts and circuits and equipment that I'd NEVER encountered before. I've been learning and teaching and doing electronics for 60 years, and recently I've been studying a lot of old books. Nothing prepared me for the complexity and creativity of railroad circuits. Signals and switches were generally driven by currents through the tracks. This required a vast system of pulse codes. When the tracks were also carrying HV to power the train, the signals and HV had to be separated, which required a set of huge inductive bonds and reactive bonds, completely alien to inductive devices used in telephones and radios. = = = = = Even the output modes were entirely foreign. Here's a Torpedo Placer, exactly what the name says. 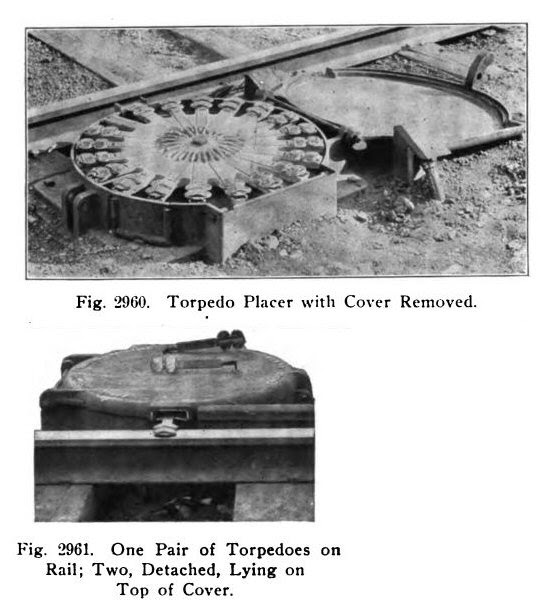 When a locomotive needs to be warned of upcoming hazards like fog or flood, how do you send an UNMISTAKABLE signal? You bomb the locomotive. The torpedo placer, upon receiving its appropriate pulses, shot out a cartridge onto the rail. The locomotive would then explode the cartridge, which would presumably catch the engineer's attention. Sort of like a ballistic Pez dispenser. = = = = = Here's one type of control board for a dispatcher: 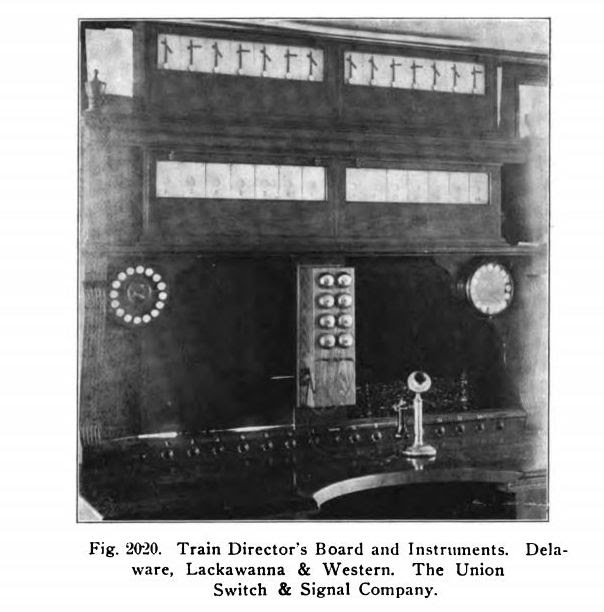 What are the phone dials? They are Train Describers. The first Describers were variations on the Wheatstone needle telegraph: 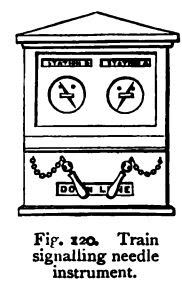 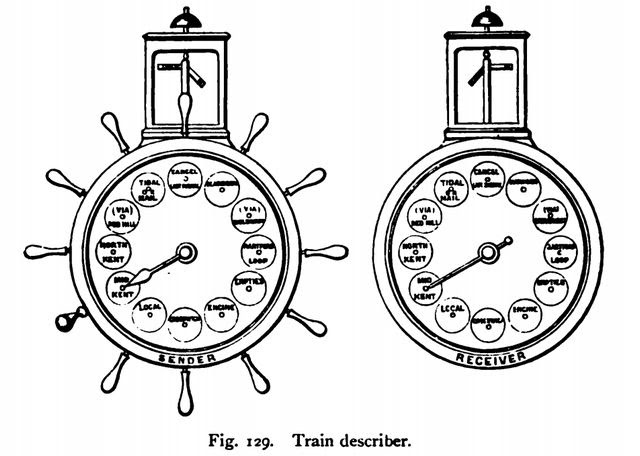 combining the needle telegraph on top with a Breguet telegraph below. When one dispatcher wanted to tell another dispatcher what kind of train is running on a certain track, he would dial to the chosen type, and the receiving dial would click up to the same point. = = = = = Later thought: Railroads with underpass problems, like the famous 11foot8, should deploy a modern version of the torpedo placer to "warn" the non-tracked vehicles. Penske approaches ... OVERHEIGHT MUST TURN ... OVERHEIGHT MUST TURN ... Penske doesn't turn ... BLAMO! Penske flattened. It was going to be destroyed anyway 5 seconds later, so no net cost. = = = = = The train describer (but not the torpedo) are now included in my Box Depots set of Poser props and scenes.