Friday, September 21, 2018
Fast development Browsing through KSHS, I noticed this document forming a utopian community in Sinaloa. The document doesn't give any clues about the purpose or vision of the community, but it pays close attention to monetary details. Presumably this was just a stock pump. 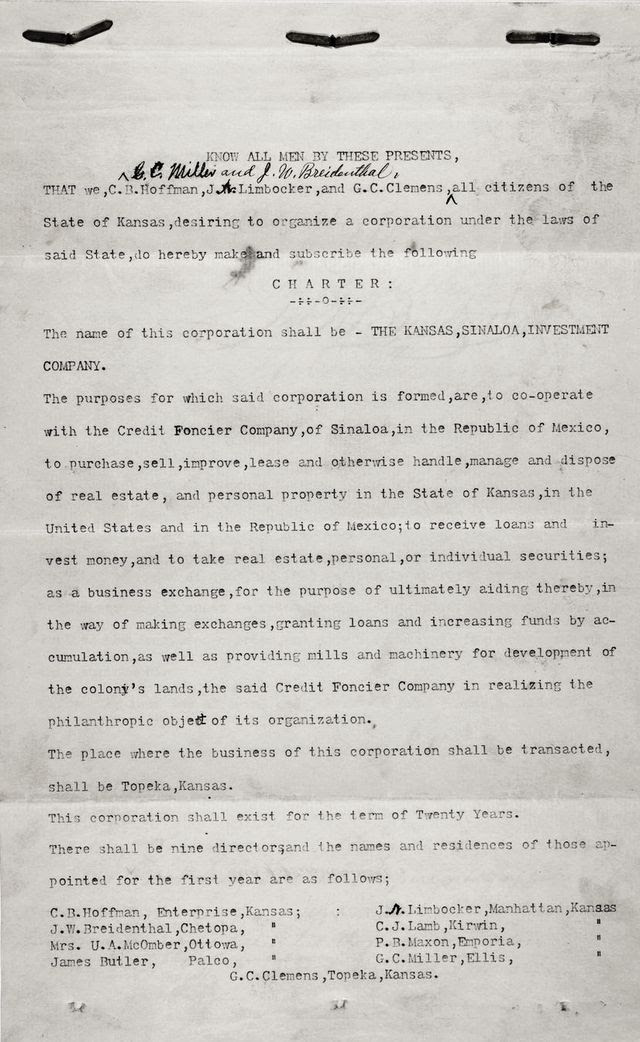 The medium is more interesting than the message. This was done on a typewriter in June 1889. The first practical typewriter was in 1873 and the first with UC/LC was 1878. So the full-fledged typewriter was just 11 years old when this was written. The method of making corrections in ink was already established. A first draft in 1970 would have the same style of correction and the same brass brads. Note also the ASCII Art under the word Charter. The skills and tricks of typing were fully developed, and had reached the remote territory of Kansas, 11 years after the introduction. The skills and tricks remained constant till the end of typewriting. The signature page is more old-fashioned. Jno. W. Breidenthal clearly fancied himself the Jno. Hancock of the new country. At the other end of the scale, Limbocker wasn't even certain about his own first name. 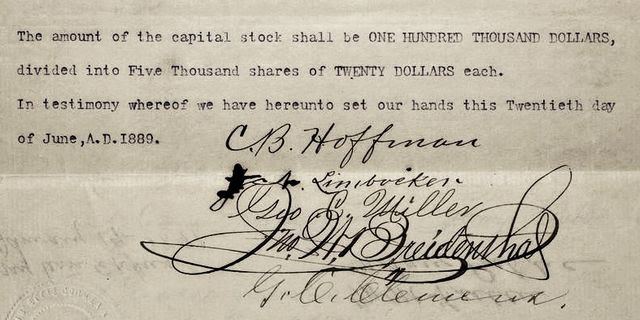 Later: I'm pretty sure this,contract,hadn't,been examined or,checked,by a lawyer,otherwise,the overflowing commas,would have been, removed. Commas matter,in a,contract. = = = = = Better info: Turns out the Kansans weren't doing this on their own. They were joining Albert Owen's Topolobampo Colony, which was organized along the lines of Henry George's land-based socialism. A classic MLM scheme, intended to make Owen rich. The colony did exist from 1885 to 1895, and as usual everyone except Owen ended up broke. The best online account seems to be here, on p 166 of the PDF.

Colonel Owen ... desired to see each state or town organized as a joint stock company, to which the ground should belong and which should sell it to the stockholders, but at the same time the purchaser should have usufruct of the land only so long as he really made use of it. If he or his heir wished to give it up, he received back from the company the earnest money. The chief principles from which A. K. Owen proceeded were: "With united forces" and "integral co-operation"; that is to say, complete social fellowship.

The Kansas document agrees with the joint stock form laid out by Owen. More: Jno. W. Breidenthal was head of the People's Party, the major populist group. His actions and appearance harmonize with his signature. As I've noted before, the Populist leaders in that era were often serving the bankers or running scams. Their diagnosis was accurate, but their prescription gave MORE power to NYC and bankers. Just like MMT and Bitcoin today.