Saturday, May 26, 2018
Rights to duties, sentiment edition Somebody posted a Memorial Day sentiment: It was soldiers, not reporters, who gave us freedom of the press. First, there's no such thing as "freedom of the press". Never has been. Utterly meaningless pseudoconcept. Every country has a vast list of taboo subjects and opinions. The specific taboos vary with time and place, but the number of taboos is pretty much constant. Second, neither soldiers nor reporters gave us the functions of the press. God gave us the functions. Every living thing, and every organized colony of living things, has 'media'. = = = = = Start from basics. Why does an individual organism need senses? To answer seven important questions. The first six are universal from bacteria to humans. The seventh is not quite universal. 1. What time is it? Day or night? Winter or summer? Full moon or new? Time to fuck? Time to swarm? Time to die? 2. Where am I? Which way am I going? Up or down? Toward the light? Toward food? Toward enemies? With the magnetic field or against? 3. Where is food? 4. Where is poison? 5. Where are my friends, and what are they doing? 6. Where are my enemies, and what are they doing? 7. The non-universal non-question: Entertainment. This applies for sure to all the 'intelligent' critters from octopuses to mammals. When we're not in immediate survival mode, we love to watch stuff happening. Entertainment merges smoothly into education. Watching somebody else catch a caterpillar or hammer a nail isn't especially interesting; but when the catch misses or the hammer hits a thumb, it becomes entertainment AND education. Smart design, connecting pleasure to learning. = = = = = Communities or colonies have mechanisms or workers to accomplish the last five purposes on behalf of the whole community. Bees have honey scouts and enemy scouts. Mammals generally send out disposable males to locate food and enemies. Plants and bacteria and modern humans use electrical networks to observe the activities of friends and enemies. Professional reporters have been around for 5000 years. Most of the sagas and testaments of religions are newspaper archives with the original bylines replaced by God, who is the biggest copyright troll in history. Greece and Rome elevated the role of scout to high literature. Troubadours and town criers continued the mix of art and observation until 1500 AD, when Gutenberg made it possible to shout on paper. = = = = = Circling back to the original question: How do modern paid reporters fulfill the basic purposes of community sensing? (Again the first two purposes are only for individuals.) 3. Where is food? Newspapers and TV carry useful ads for grocery stores, but the reporters aren't involved. 4. Where is poison? Reporters have specifically inverted this purpose. They warn us LOUDLY of fake poisons to stir up a war, or to squash one industry and boost another. They never warn us of real toxins, because the reporters are the real toxins. 5. Where are my friends, and what are they doing? TV offers us a complex and addictive array of fictional friends, ruining our expectations for real friends. 6. Where are my enemies? Reporters have specifically inverted this purpose. They warn us LOUDLY of fake enemies to stir up a war, or to squash one tribe and enrich another. They never warn us of real enemies, because the reporters are the real enemies. 7. Entertainment: We get to see plenty of failures, but we're NOT ALLOWED to learn from them. Any attempt to draw ACCURATE conclusions from stories about crime is forbidden. Sports give us plenty of crashes and failures and injuries, but the whole process is carefully scripted to avoid any useful lessons. When we see a Tesla crash, we're not allowed to conclude that Teslas are bad. Instead we are required to BUY THE DIP. = = = = = Concluding: The press has never been free, so we can't thank anyone. In earlier eras the press occasionally performed the DUTY of community senses, but not now. There is no excuse and no defense for the "right" of "press freedom". = = = = = Semi-relevant sidenote... When discussing the universal sense of Entertainment, I linked to the Everett TweakerCam as a good example of watching interesting stuff. This morning there's nothing interesting happening on the ground, so the cam focused on something closer to the cam itself. 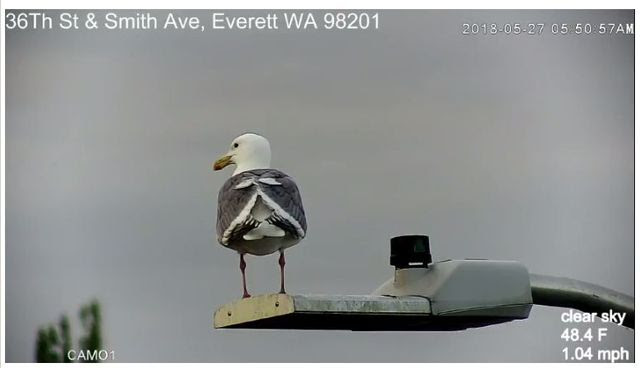