Monday, January 01, 2018
Metashaving a metayak Quora.com was discussing the concept of shaving a yak. The original story is worth reading if it's not familiar. I've been running through a classic yakshave this month. The process started with a real failure of my old computer. Its audio and USB sections have grown flakier over time, and the audio finally gave up entirely. Luckily I had already bought a "new" refurbished Dell Optiplex, so I went through the messy procedure of transferring stuff. After a week or so the "new" Optiplex turned out to be even worse than the original Inspiron. I bumped into a real obstacle in my real courseware work: I needed to make a model of the insula to illustrate how the insula hides behind the temporal lobe. The "new" Optiplex didn't have the right OpenGL drivers to serve the various graphics programs, so I had to restart the old computer, make the model, and transfer the resulting image to the "new" Optiplex. The "new" machine then showed other faults, including a failed CD drive. If I had been simply screwing around, this inconvenience might have been OK. But I'm doing real work this year, a real project with real deadlines. So I ordered a genuinely NEW Dell Inspiron, and spent another day or so transferring and setting up. Now the graphics stuff works, and I'm able to move forward again. When I read the yak story on Quora this morning, I decided to illustrate it, since I've gone way too long without showing Polistra and friends. Start the new year right and all that. 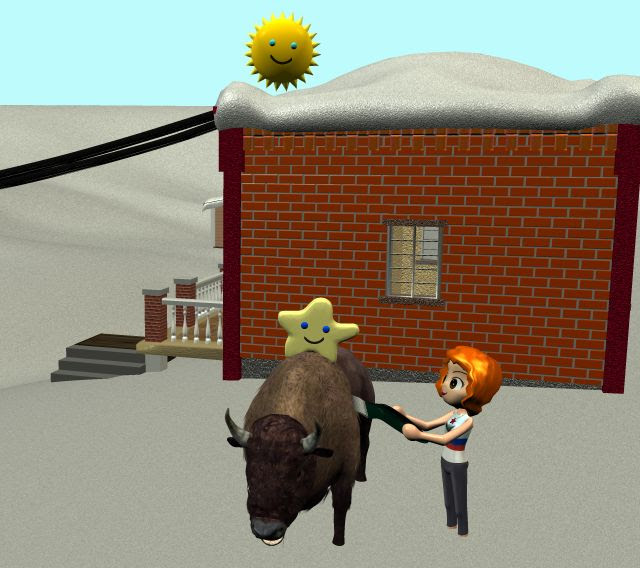 As I built this image I was cooking ramen in the kitchen. The ramen started boiling, so I got up quickly to stir it and then eat it. When I returned from eating, the monitor was BLACK. Tried wiggling all the cords, shut down and restarted, still BLACK. No pilot light, no nothing. SHIT! WHAT THE FUCK AM I GOING TO DO? Without a monitor the whole computer is useless. Finally I realized: The monitor has a nearly invisible touch-switch in the plastic border, and I must have bumped it as I was getting up suddenly to tend the ramen. Touched it again, and monitor turned on. (I never use the switch, so it wasn't on top of mind, especially in OH SHIT mode.) This led to an important thought: What will I do when the monitor ACTUALLY fails? So I quickly ordered a small auxiliary monitor to keep in storage against such an emergency. The last action happened because I was absorbed in illustrating the story of shaving a yak. It didn't happen as part of the process of shaving a yak. So it's metashaving a metayak.