Thursday, October 20, 2016
Coulda hada GR Pointless rambling about Ramblers. As I continue binge-reading old electronics mags, I'm feeling guilty about helping to ruin American industry. Some of these mags focus heavily on acoustics, with plenty of pictures and articles about acoustics labs and speech labs. Since I worked much of my life in such labs, I pay close attention to these articles. The labs shown in the magazines always used GenRad instrumentation, made in Boston by a company with close ties to MIT and Bolt Beranek. This makes sense. GR made all the tools you need for those labs, and the tools were designed to work together. In 20 years of work at three universities, I never used any GR equipment; can't even remember seeing any GR stuff. Everything was Brüel & Kjær, made in Denmark. Brüel & Kjær equipment was notoriously fragile, designed to fail. Their sound-level meters had capacitor mics energized by a 200 volt charge. When used in high humidity they quickly and permanently zapped. Pennsylvania always has high humidity, so the BK equipment in the Penn State acoustics lab was permanently fried. Atrocious design. I don't know if GR equipment was better overall because I never used or repaired it, but it's clear that GR sound level meters of similar vintage were more convenient in form: 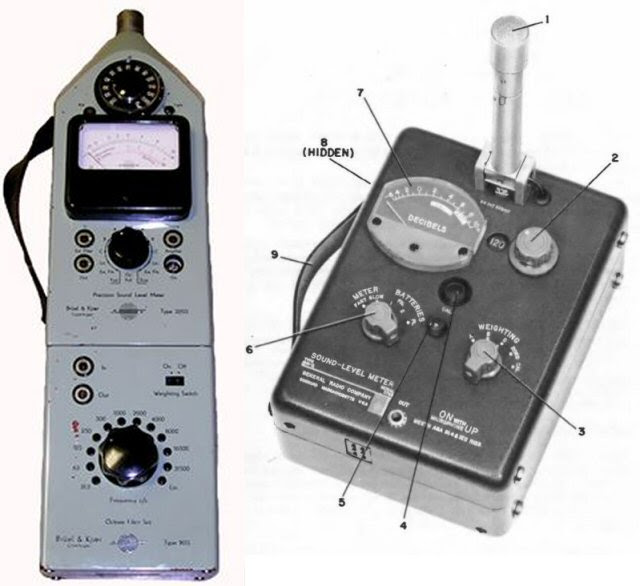 Note that the weighting control is part of the main box on the GR meter. The BK had a "detachable" module for weighting and filtering, but in practice you always needed the "detachable" module. So the BK meter was long and unwieldy and wiggly, with scratchy plugs between the modules, and the fried mic wasn't pivotable. Looking at the schematic, the GenRad was designed to take several different types of mic including dynamic, piezo and condenser. You could pick to suit your conditions. Every component in Brüel & Kjær was peculiar and unique, so every repair required ordering parts from Denmark. The GR schematic shows several specific-value resistors, but the tubes and transistors are standard. Ordering the specific Rs from Boston would have been a lot faster and more convenient than ordering from Denmark. No international customs, no exchange rates. Given all of those practical considerations, why was Brüel & Kjær the ONLY CONCEIVABLE equipment? Why was there no GenRad? If I had known there was a better alternative, I could have influenced purchasing decisions toward GR. But I didn't know, so I didn't influence. It had to be the natural academic preference for COOL foreign stuff. I shared that attitude for many years, which is why I drove fragile and literally fry-able VW deathtraps instead of sturdy Ramblers. Same comparison. The Rambler American was similar in size and gas economy to a Beetle, but much more convenient and resilient and SAFE and comfortable. Parts were easier to order. Practicality doesn't count when COOOLness is at stake. Brüel & Kjær had COOL ümlæuts and WEIRD kj combinations, while GenRad only had dull generic English words. General. Radio. Rambler. American. 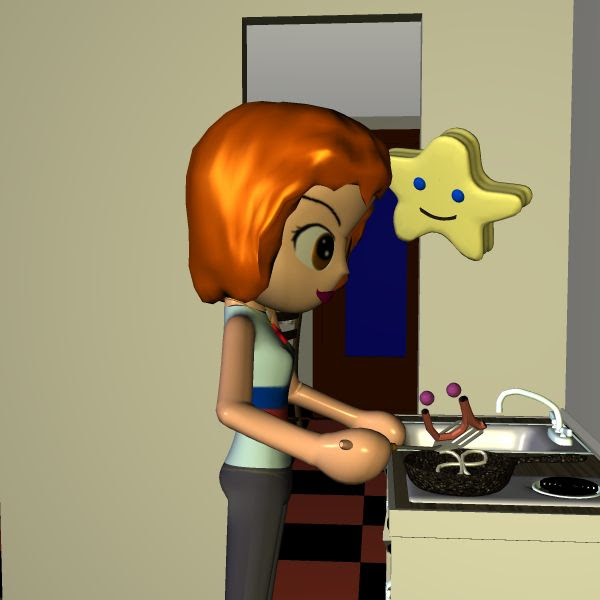 I'm deeply sorry. = = = = = Next day: GR gave me a little gift despite my treachery. I'd halted my experimentation with submini tubes during the two months around hernia surgery. Now that I'm pretty much healed, I tried to resume the fiddling but wasn't getting anywhere. One of the GR sound level meters included two of the same 6418 tubes I've been using, and the schematic showed me a detail of proper connection that wasn't obvious from the data sheets. Followed their lead, and presto! Circuit works! = = = = = Later note: GenRad's 1961 brochure shows that the BK humidity problem was well known, and GR was specifically answering it with their products:

Its characteristics approach those of condenser microphones classed as laboratory standards. Unlike condenser microphones, however, the ceramic unit does not require a special preamp with a high dc polarizing voltage supply, and its impedance is an order of magnitude lower, so that leakage due to high humidity is less of a problem.

So there was NO EXCUSE for using BK in a place like Pennsylvania.