Wednesday, April 13, 2016
Due by average Wandering through KSHS again, found this collection of documents left over from the founding of Bluemont College, which became K-State after Isaac Goodnow finagled a state purchase. Goodnow was an IPO man in modern terms, picking up capital by crowdfunding and then cashing out at a profit. Roughly half of the documents are 'share certificates' for the donors, and the other half are invoices from Eastern companies for schoolbooks and other academic supplies. This 1861 invoice caught my eye: 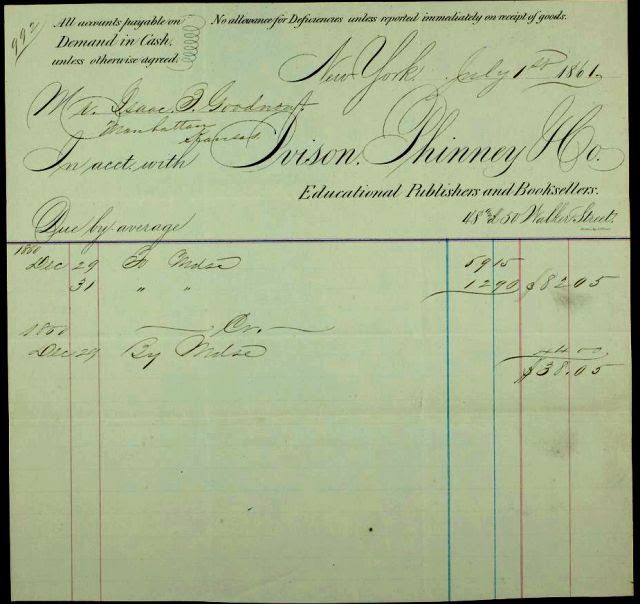 Fantastic turbo-Palmer cursive. Some of the cursive, such as the firm name Ivison Phinney & Co, appears to be part of the printed form via woodcut, and some appears to be done by the clerk. The style is so similar that it's hard to tell. Ivison Phinney was at 48 Walker St in NYC. Googlestreet shows an old-looking building at that address, but Zillow indicates that the current building dates from 1915. It's currently an extremely haute couture store with condos upstairs. 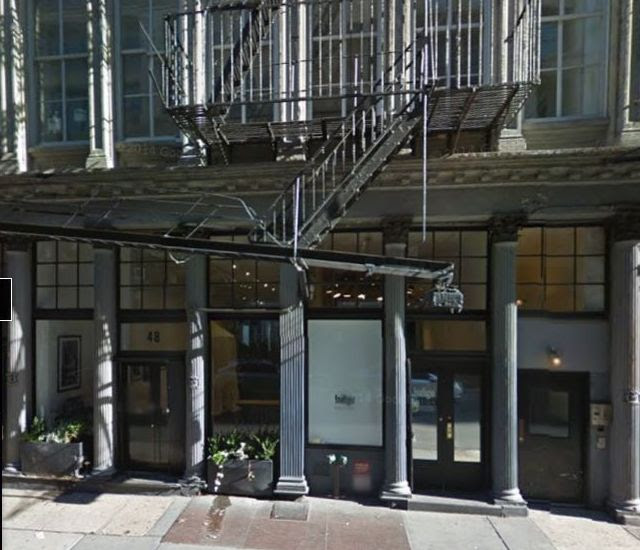 The phrase due by average was foreign to me. Like most commercial jargon it's poorly represented in dictionaries, thus hard to find in online searches. An 1841 Commercial Arithmetic text provided an example if not a proper definition: 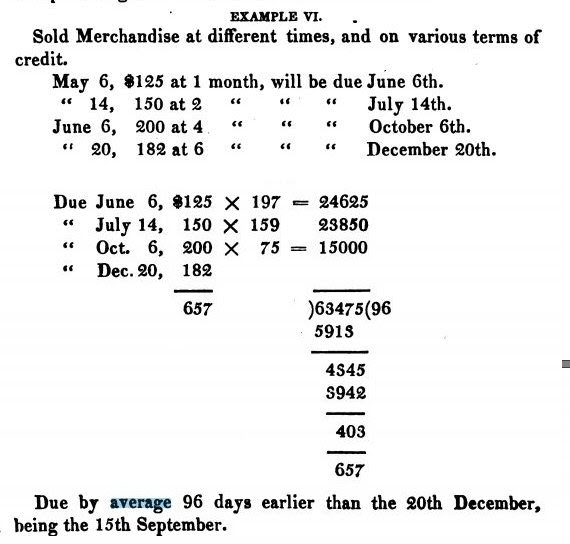 When an account included frequent purchases and frequent payments, each monthly bill calculated the average of the due dates for each side and then subtracted the two sides. This Ivison bill includes two debits (To Merchandise) and one credit for payment made in kind (By Merchandise). Though it's not stated, I doubt that Goodnow was paying in wheat; more likely this was a return for refund. Both transactions were in Dec 1860, and the bill was sent in July 1861, so Goodnow was expected to add interest to his payment 'by average'. The method is just as complex and impenetrable as the Palmer cursive! No wonder both died out. These amounts look small, but $82 would be around $2000 now by general inflation. A meaningful amount. Textbooks followed a much sharper curve. 1860 college books were $2, so Goodnow was buying 40 books on this invoice, assuming shipping was COD. 2016 college books are $200, so an invoice for 40 books would be $8000. = = = = = Sidenote 1: Goodnow's crowdfunding was based on the premise that he was helping to set up an anti-agrarianslavery educational outpost in the new territory. He was probably more committed to profit than to abolition. Still, I wonder what Isaac would think of this effort by Pearson, a modern 'educational publisher and bookseller'. Pearson is setting up educational outposts in places like Philippines, explicitly designed to turn out call center employees. Spreading the latest form of slavery, taking jobs from Americans instead of training Americans for jobs. Sidenote 2: Ivison Phinney's cursive apparently caught so many eyes that they gave up publishing and specialized in pens!