Wednesday, November 11, 2015
Fun with Soviet maps Was reading about an archive of highly detailed old Soviet maps of America. Some of these are available commercially, though only a scattered and incomplete set. Couldn't resist buying some familiar areas from Mapstor.com. These maps are old but accurate. Looks to me like they're from the early '50s. Interesting variation in transliteration, indicating that some areas were based on personal observation (ie spies) and some by reading American atlases and dictionaries. = = = = = 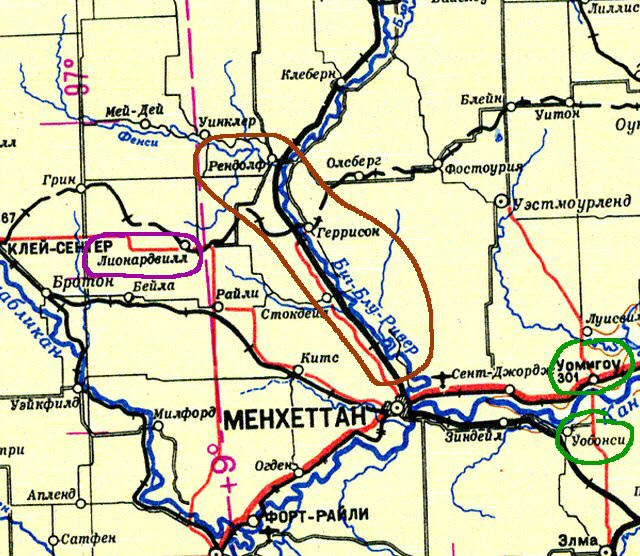 The area around Менхеттан shows the Big Blue undammed (circled in red). Tuttle Creek Reservoir was built in '56. The little towns like Randolph, Garrison and Stockdale are still there on this map, not drowned yet. Most pronunciations on this map are by actual listeners. Some of the town names are NOT obvious to a stranger, like Wamego and Wabaunsee (circled in green). Those are correct, given the usual transliteration conventions. But Lee-o-nardvill (circled in violet) should have been easy! [I get a tickle out of reading these names aloud with full Russian trills and palatals.] = = = = = 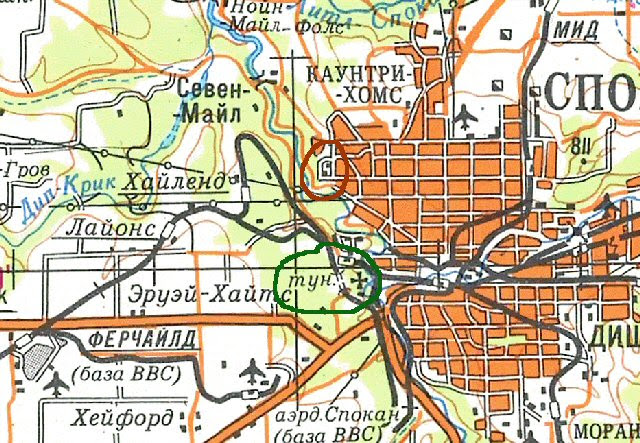 The Спокан map is less accurate on names. Спокан itself is right (ie not Спокэйн) but Country Homes is oddly wrong, even by the dictionary. Just below Cowntry Homes is the VA Hospital (circled in red) with buildings. In general military facilities and major industries are shown in detail. Note that I-90 wasn't built yet, and also the Greenwood Tunnel (circled in green, indicated as 'tun') is present on the map. This tunnel was eliminated in 1970. = = = = = The transliterator for Oklahoma was GOOD but a little sloppy. He not only got the local oddities mostly right, he also moved away from the standard conventions to get a close rendering of real American pron. I couldn't downscale this picture without losing stuff, so it overflows. The date on this one is puzzling. It does show the tiny Kegelman Field near the Salt Plains, but doesn't show the giant Vance AFB near Enid. Both were established in WW2. Have to assume the missing Vance is an oversight. Everything else fits the same early '50s pattern as the Kansas map. 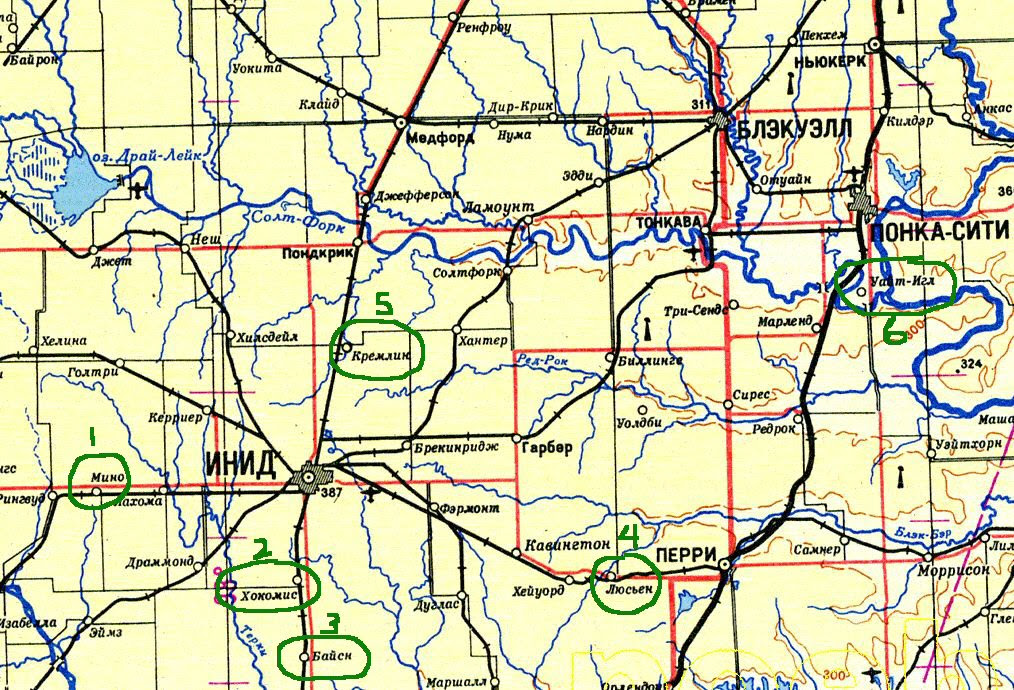 I've numbered some notables. 1. Meno, correct local, not predictable. 2. Hokomis should be Waukomis. Oops. 3. Bison, just right. Didn't try to put the o in. 4. Lucien, interesting use of the soft sign, but I think (not entirely sure of old memory) it's actually pronounced luSEEN. 5. Kremlin. No problem there! 6. White Eagle, just right, no unnecessary vowels. Also, part of the Arkansas river is on this map but the labels aren't quite in the frame. It's spelled Арканзас all along its length, and the state is also Арканзас. This Kansas version of the name was not well known in dictionaries; a normal American dictionary would lead a Russian to write Аркэнсо for the river and the state. Makes me think they had a spy in Kansas. = = = = = More fun next day.