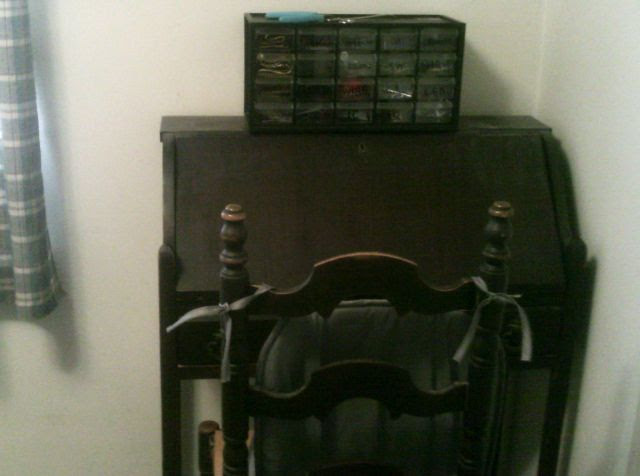 This little folding desk belonged to Grandma. She bought it used in the late '40s. It was probably a Sears or Wards product made in the '20s. Possibly homemade, since it doesn't have any labels or brands. Not a valuable antique for sure. I doubt that Grandma used it much. She kept letters and checkbooks in it, but I never saw her open it up and write anything on the foldout part. I know she didn't use it after 1970 when her apartment was remodeled with a dense bouncy carpet. The desk was extremely tippy on that carpet. I tried to use it once and found out. The varnish on the inner surface of the foldout is remarkably undented and unscratched, indicating very little usage by anyone. [[[ Major update Sept 4: I've been using the desk a lot; got tired of the little compartments on top that blocked part of my workspace. Carefully pried off the compartments. Made more room for my work, and also revealed a couple of letters that had been slipped in between the compartments and the top board! Both letters seem like junk mail, not important documents. One is a blank 1938 order form to the Personal Shopper at JL Hudson dept store in Detroit, the other is a mimeographed 1938 postcard sent to investors of a business in Detroit. But how did they get there? It's a tight fit, so they weren't tossed in by accident. If you wanted to discard these things, you'd simply discard them; if you wanted to stash for later retrieval, you wouldn't put them in a place that requires disassembling the desk. Best guess is kids playing Secret Agent games with throwaway mail. No matter the cause, the mere presence of these 1938 Detroit letters changes the story of the desk. Clearly Grandma brought her furniture along when she moved to Okla ... which also changes the story of Grandma and Grandpa as I understood it. No surprise there. I figured out a long time ago that the family story as understood is full of myths and mysteries, with Grandpa as Official Enemy. ]]] When Grandma died in 1990 I inherited the desk and chair along with a couple other items. I never used the desk or chair because I remembered that it was tippy and unbalanced. For 25 years this desk and chair have been purely ornamental, holding miscellaneous items like spare disk drives inside and decorative crap on top. The chair, with its protruding posts, is good for hanging a shirt or coat. = = = = = A few months ago, when I returned to electronics, I decided to use the desk for project storage and possibly a workspace. Cleaned out the useless junk that had accumulated, and put the soldering iron, vise, and breadboards inside. Added cushions to the chair. But for some reason I still didn't OPEN IT AND WORK WITH IT. Didn't even try sitting in the chair. 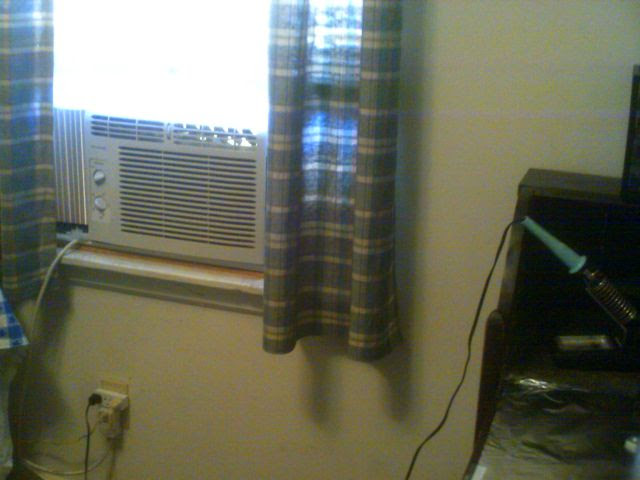 I just continued working on the big eating table (blue tablecloth to the left), as I've been doing for every task that requires a surface. I quickly found that the eating table has two disadvantages for this task. The soldering iron's cord goes rightward to the nearest plug, which is highly inconvenient for a left-hander; and the eating chair is directly in front of the air conditioner, which is highly uncomfortable. (Even a tiny house has microclimates!) Grandma's desk would solve both of those problems. It's to the right of the plug and out of the AC's path. A couple days ago I finally tried it. The chair is comfortable enough, and the desk is absolutely non-tippy on my wood floor. Perfectly stable. 25 years of stupid assumptions destroyed by reality. 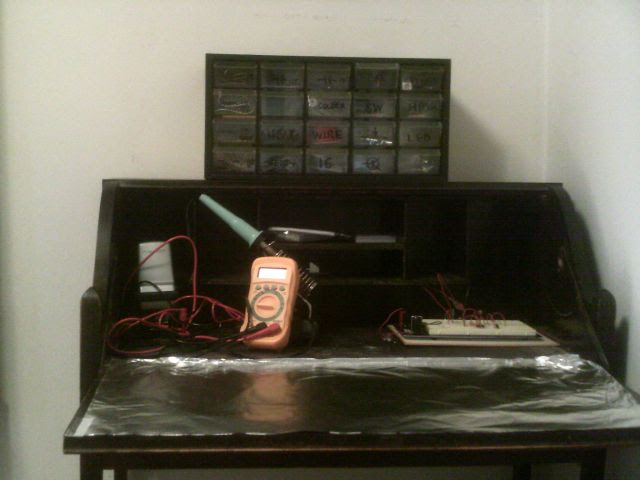 I added the foil to protect the nice untouched varnish from hot solder, and it also makes the area easy to clean. Every bit of stripped insulation and every solder blob stands out on the bright surface. In short: This desk is around 80 years old. I've known it for 60 years and owned it for 25. It may have been used for practical purposes in the first 20, but it's been purely ornamental for the last 60. Until two days ago. Now it's back in the saddle again. Turns out to be ideally suited for a purpose that didn't exist** when it was built. = = = = = First real project: building one of those Pixie QRP transceivers. These have been adequately 'unboxed' elsewhere, so I won't bother with the details, except to note that other 'unboxers' found missing parts. I found all the needed parts in the kit, plus a few extra caps. = = = = = The finished Pixie in context. I like to use hardback book covers as platforms. The key, needless to say, is Russki. Has a nice feel and a nice sound. The pieces will get firmed up and glued down now that I know it works, but it's not going to get highly formal. I'm not licensed yet. After I get licensed, I'll buy a serious receiver and build a better transmitter from scratch. This is just a 'jumpstart' to make electronic fun happen fast. 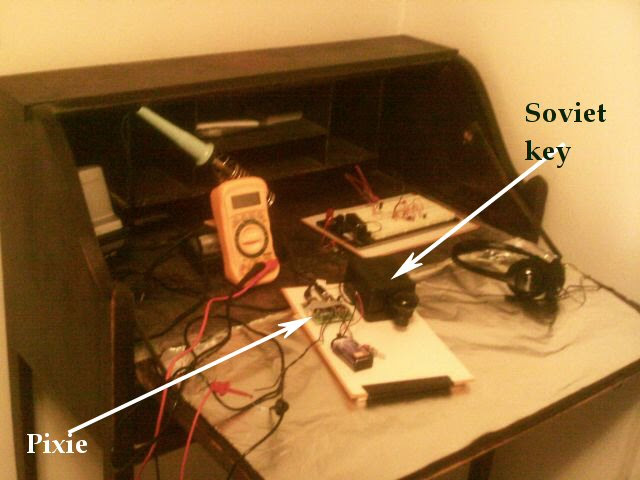 The VOM is set to read frequency. Here's a closeup with Pixie unpowered: 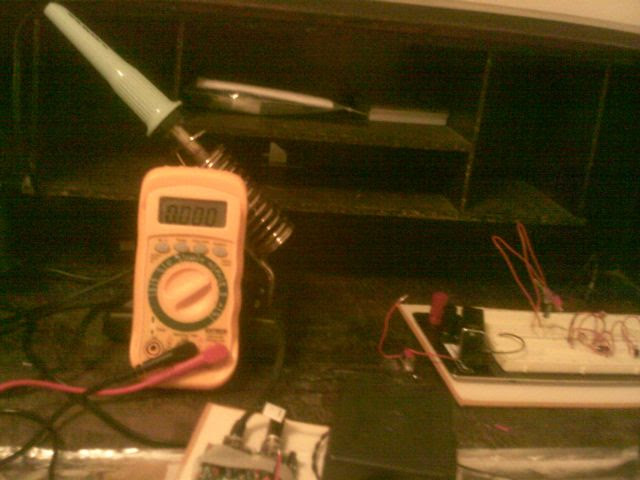 And here's what the freq meter shows with Pixie turned on but unkeyed. A foot-long pair of wires leading to a 50-ohm R serves as antenna and dummy load. I couldn't hear any signals in the earphones, but did hear appropriate-sounding static, identical to the sound I heard on a portable SW receiver tuned to 40 meters. Lack of signal is typical. Spokane is NOT a hot spot for shortwave. 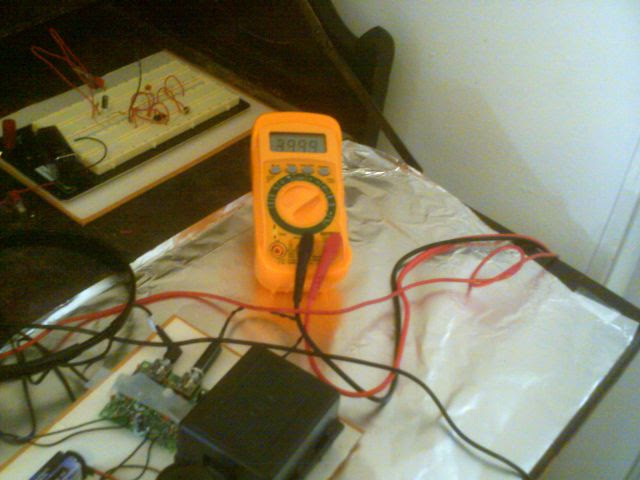 And here's the keydown condition. 7020 kc. Pixie's xtal is nominally 7023; can't tell if this is a 'pulled resonance' or just slight inaccuracy of the VOM. The portable SW receiver also verifies that a signal is coming out. Tuned across the 40-meter band while V-ing the key, and sure enough the clicks come through around 7020. 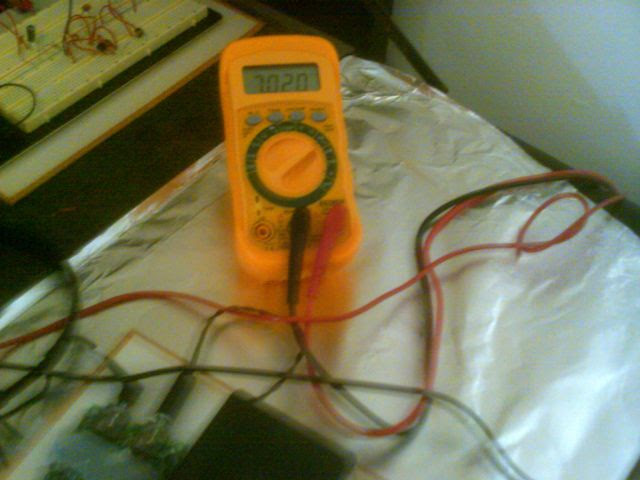 Yay! Fun! = = = = = The desk and I are both proud. We're back in the saddle. This saddling up, returning to electronics, feels significant in my own life as well. Feels almost like a 'calling'. Vaguely related to the Benedict option crap and the Orlov crap. I'm not sure where this is going, but my analog electronic skills and tools and junkbox may turn out to be useful in a world of barter. Or this may lead toward the right direction. If nothing else, I'm having loads of fun. 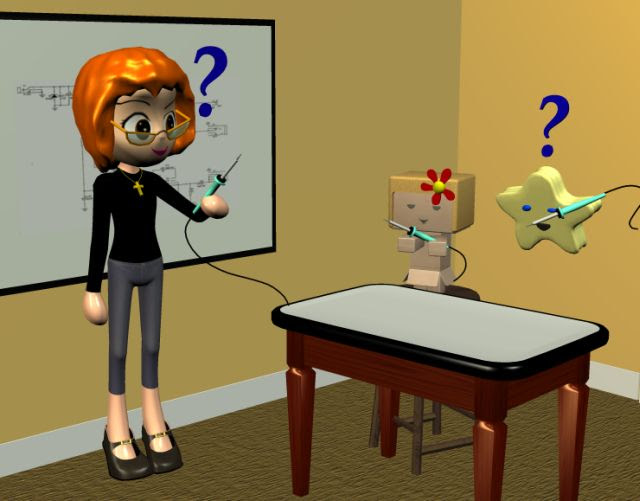 The soldering iron is a key to an unknown door. Danbo seems to know something.... = = = = = ** Footnote on "didn't exist"... Radios were starting to grow popular in the '20s, but building and fixing them involved BIG tools and BIG workbenches, more like carpentry or auto mechanics. A little desk like this wouldn't have served at all.