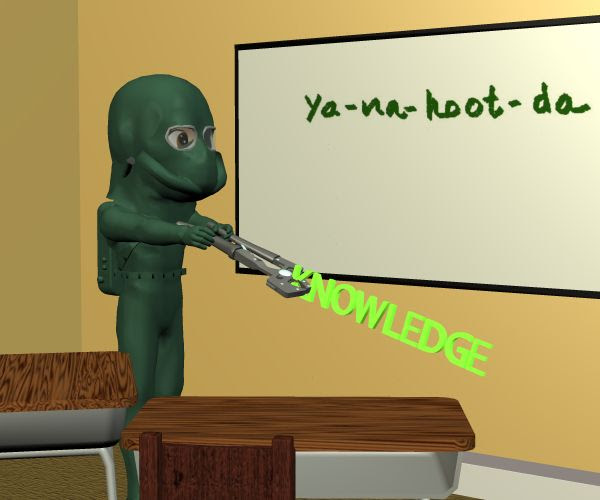 Professor Polistra brings a peculiar mix of linguistic oddities and radioactive toxins this week. She needs the hazmat suit to handle the latter. = = = = = Frack Ahhh: According to BBC, this is what Top Gear presenter Jeremy Clarkson was involved in. Since BBC hates fracking, it's easy to see why they fired Clarkson for making an appreciative noise about fracking. = = = = = Ya-na-hoot-da: Pronunciation of Vanuatu, according to one ABC radio announcer. Unusual for an American announcer to screw up pronunciation so badly; normally this job is reserved for BBC. = = = = = In kilter: A wonderful back-formation in a column about Richard 3's relevance to modern politicians. "The Tripadvisor monarch, unearthed in a Leicester car park, is also an oddly modern symbol for a country whose preoccupations run in kilter with the anxieties of his lifetime." Must be something about R3 that inspires linguistic thinking. Prof Polistra was also inspired to think freshly about negation and de-negation. = = = = = = = = = = = = = = = = = = = = = = = = = = = = = = = = = = = TOXIC SLUDGE BELOW THIS LINE= = = = = = = = = = = = Understand: In the infinitely evil jargon of physicists, understand means destroy. The LHC, which is the most evil thing ever built, suffered a short-circuit this week which will delay its latest attempt to understand the universe. CERN director Rolf Heuer said: "All the signs are good for a great Run Two. In the grand scheme of things, a few weeks' delay in humankind's quest to understand our Universe is little more than the blink of an eye." Nature is trying to tell you something by placing these difficulties in your path, Rolfie. Of course you aren't listening because infinitely evil all-consuming all-obliterating entities do not listen to their victims. = = = = = Knowledge: In the infinitely x infinitely x infinitely evil jargon of Gaia-worshippers, knowledge means total destruction of your mind. An infinitely x infinitely x infinitely evil entity operating under the title of "KATHERINE JEFFERTS-SCHORI" has emitted the following infinitely poisonous toxin: “Episcopalians understand the life of the mind is a gift of God and to deny the best of current knowledge is not using the gifts God has given you. In that sense, yes, it could be understood as a moral issue.” Torquemada strongly approves of entity JEFFERTS-SCHORI. He also used torture and murder to enrich and empower the monarchs and elites of his time, eliminating the denialismimimists of his time to preserve "sacred knowledge". But according to most records, Torquemada only killed about 2000 heretics, while you are killing millions of innocent poor people who can no longer find decent jobs or afford to heat their houses in winter.