Sunday, March 29, 2015
Assume death ====> Commit genocide Robert Chesebrough, the first oil millionaire, quoted in a petroleum industry trade journal in 1920. A few months ago he created something of a stir by announcing that the cannel coal fields of America and the oil shale beds of the Rockies alone would be able to furnish motor fuel for years upon years, even if the petroleum fields as we know them were milked dry. Correct. His major difference with the geologists, however, is on another matter. [He has been saying since 1873] that coal is nothing more than solidified petroleum. Natural gas, he avers, is being made all the time in the depths of the earth where there is intense heat and great pressure. Correct. His exact explanation of the mechanism seems dubious, but his basic understanding that fossil fuels are NOT fossils is correct. 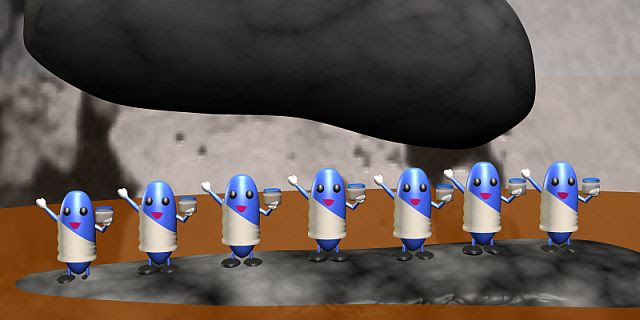 [Our little bacteria are saluting Chesebrough's Vaseline, which came well before Gasoline as a commercial use of petroleum. In more generic terms, oil was healing burns thousands of years before it was turning wheels.] Through the 20th century Age Of Total Death, geologists continued to run their lifeless theories. It was all a matter of mechanical pressure, and it was all finished. No more oil will ever be made. These theories were highly advantageous to the oil companies. Assumed scarcity = high prices. (When you hear alleged leftists shouting about Peak Oil, ask Cui bono?) Recently, as biologists finally OPENED THEIR FUCKING EYES and started to PAY ATTENTION TO FUCKING REALITY, they realized that the same bacteria are still down there, still gobbling up organic matter, still turning it into oil and gas. One consequence of the dead years: We've stopped putting new organic matter into the ground. The Total Obliterators of the EPA Terrorist Army have prohibited us from recharging the reservoirs with trash middens and landfills and septic tanks. As usual the death-assumers are death-makers.