While obesity is a complex and multifaceted problem, much of the strategy behind combating it boils down to healthy eating habits. Taking into account the primary role of subjective appetite sensations in said habits, a group of researchers recently compared the satiety impact of two popular breakfast choices: oatmeal and ready-to-eat breakfast cereal (RTEC). ... The oatmeal breakfast resulted in a greater increase in perceptions of fullness and a greater decrease in perceptions of hunger, desire to eat, and prospective intake in the 4-hour period postprandial when compared with the RTEC,"

This principle was well-known a hundred years ago but forgotten in the interim. Here's a page from 'Air, water and food from a sanitary standpoint' by Ellen Richards, 1900. 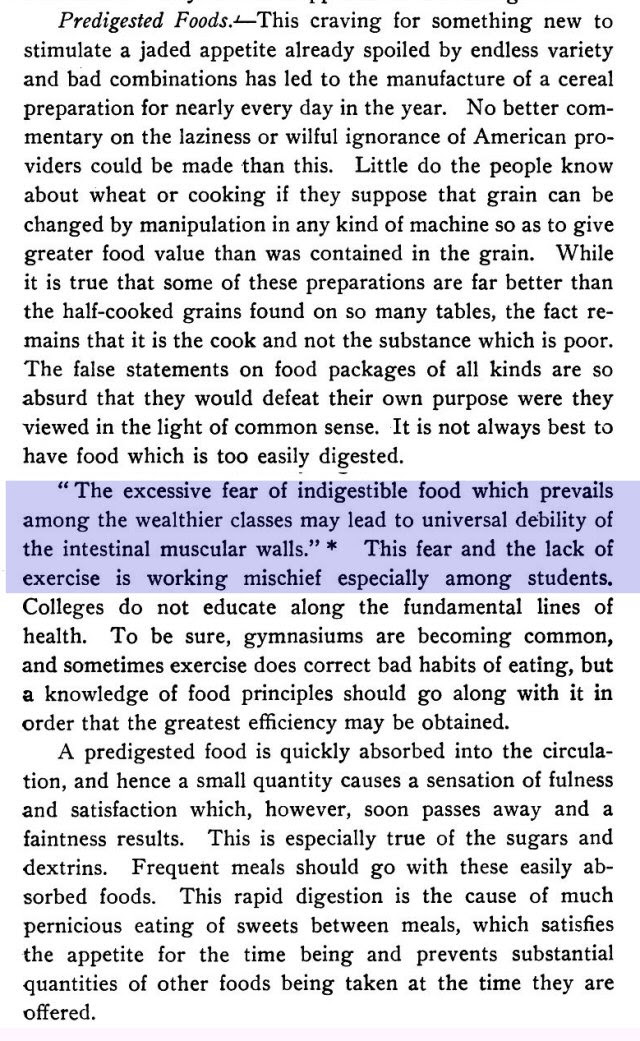 Richards distinguishes between adulterated and sophisticated foods. Adulteration is dilution of real food by inert or bad stuff like water or sawdust. Adulteration faded after the Pure Food and Drug Act, but has recently returned as a trick to avoid raising prices. Sophistication is pre-digestion that lulls the digestive system into fatal laziness. Sophistication is much more common now, and still unaffected by laws. (In fairness, I don't see how you could practically regulate it.) Unfortunately Richards's advocacy failed. The commercial forces of sophistication (love that word!) remain in control, and the idea that the digestive system needs to work for its living is still "new" and "marginal".