Saarbrücken researchers transferred this skill in piano playing to text entry by developing a computational approach that assigns words and letters to notes and chords. In this way experienced as well as hobby-pianists can enter text as fast professional typists. "Our approach ensures that frequent letter sequences are translated into melodic structures that are well known and can therefore be played quickly by a pianist," said Feit. In this way, frequent letter pairs like "th" or "he" were translated to a third or a fifth -- intervals that are very well practiced by every pianist. The letter "e," which occurs most frequently in English, was mapped to different notes in different octaves. Furthermore, frequent syllables and words were mapped to chords of the major and minor scales.

The chord-based mapping is new and interesting, but the use of a piano keyboard to enter text is extremely old. The first telegraphs in the 1830s used piano-like keyboards, and then the first typewriters in the 1870s did the same. It's not clear why the multi-row keyboard took over from the single-row piano type; probably for compactness and portability rather than efficiency. A flat keyboard is unquestionably more efficient and less harmful to the finger joints. Some of the early telegraphs carried the metaphor all the way with pedals. Makes sense when you think about it, and would make even more sense on a computer where you need to hit simultaneous shift/ctrl or ctrl/alt combinations along with the keys. Let the feet take those modifier keys, just as the feet take the modifier Sustain and Soft actions on a piano. Semi-permanent modifiers like italic, bold, and font change would be appropriate for pullout stops, by analogy with an organ's voices. 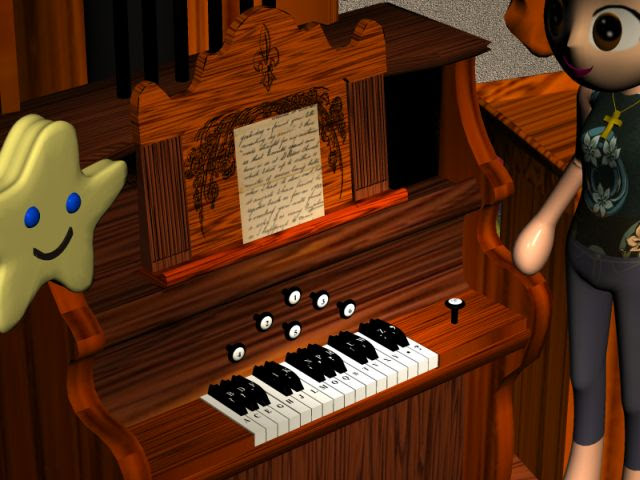 Polistra shows how the original keyboards looked, on her imaginary but typical Gas-light Night Telegraph machine.  ¶ 3:12 AM