Tuesday, August 27, 2013
Anderson's manifesto Following up on this post and innumerable others on the same general subject... Trying to disentangle the strands of education (Manual Training vs Theorize & Memorize) and politics (Sanity vs Chaos). Some help from a history of K-State written in 1902. (From Kansas State Hist Soc, p 174 of the PDF.) Growing up in Manhattan, and living across the street from the Goodnow House at a time when it was still occupied by a Goodnow descendant, I thought I understood the story, but I'd never read these details before. Highly illuminating. Briefly: The anti-southern-slavery** wackos who settled Manhattan came from Mass and Conn. The Mass contingent were Methodists and Grahamites who had been recruited at Wesleyan Academy in Wilbraham. Isaac Goodnow and Joseph Denison were major players in that group. Goodnow is generally credited with founding KSU, but it was actually a team IPO. Goodnow, acting as a venture capitalist, organized Bluemont College as a Methodist school with Denison as headmaster, hoping to sell the facility to the newly formed state government. When the gov't hesitated, Goodnow moved into political positions where he was able to maneuver the sale. After that, Goodnow played politics for a while then settled into real estate. Though nominally a land-grant college and nominally devoted to agriculture and mechanics, K-State remained a Methodist liberal-arts school from its formation in 1859 until about 1873. At that point farmers, feeling their political hard red Wheaties through the Grange movement, wanted the college to fulfill its assigned mission of training farmers and performing ag research. The Grangers placed new members on the board and overthrew the old leadership. Their newly appointed president, John Anderson, laid out his project in the 1874 college handbook: 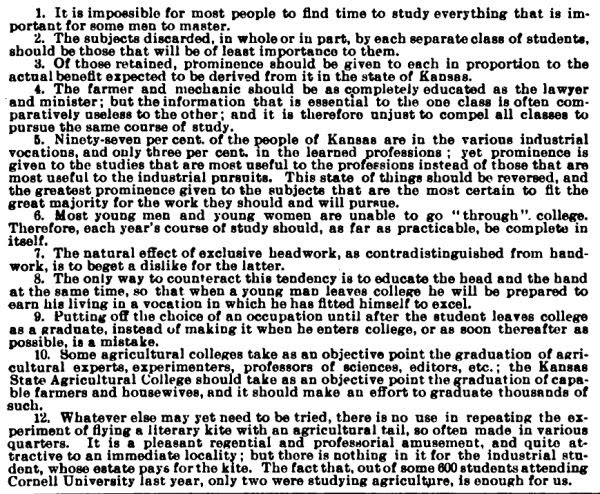 A magnificent manifesto. Transcribed from the PDF:

1. It is impossible for most people to find time to study everything that is important for some men to master. 2. The subjects discarded, in whole or in part, by each separate class of students, should be those that will be of least importance to them. 3. Of those retained, prominence should be given to each in proportion to the actual benefit expected to be derived from it in the state of Kansas. 4. The farmer and mechanic should be as completely educated as the lawyer and minister; but the information that is essential to the one class is often comparatively useless to the other; and it is therefore unjust to compel all classes to pursue the same course of study. 5. Ninety-seven percent of the people of Kansas are in the various industrial vocations, and only three per cent in the learned professions; yet prominence is given to the studies that are most useful to the professions instead of those that are most useful to the industrial pursuits. This state of things should bo reversed, and the greatest prominence given to the subjects that are the most certain to fit the great majority for the work they should and will pursue. 6. Most young men and young women are unable to go through a full college degree. Therefore, each year's course of study should, as far as practicable, be complete in itself. 7. The natural effect of exclusive headwork, as contradistinguished from handwork, is to beget a dislike for the latter. 8. The only way to counteract this tendency is to educate the head and the hand at the same time, so that when a young man leaves college he will be prepared to earn his living in a vocation in which he has fitted himself to excel. 9. Putting off the choice of an occupation until after the student leaves college as a graduate, instead of making it when he enters college, or as soon thereafter as possible, is a mistake. 10. Some agricultural colleges take as an objective point the graduation of agricultural experts, experimenters, professors of sciences, editors, etc; the Kansas State Agricultural College should take as an objective point the graduation of capable farmers and housewives, and it should make an effort to graduate thousands of such. 12. Whatever else may yet need to be tried, there is no use in repeating the experiment of flying a literary kite with an agricultural tail, so often made in various quarters. It is a pleasant regential and professorial amusement, and quite attractive to an immediate locality; but there is nothing in it for the industrial student, whose estate pays for the kite. The fact that, out of some 600 students attending Cornell University last year, only two were studying agriculture, is enough for us.

Anderson turned the school in the proper direction, though not ideally or completely. It continued to provide real education until the 1950s, when social pressure from accreditors and other colleges overwhelmed rationality, and it returned to the useless Theorize & Memorize model. The Grange connection helps me to solve the question I asked last week: Why do conservatives love T & M, which belongs solidly and consistently to Lenin and Satan? Why do conservatives hate Manual Training, which belongs solidly and consistently to traditional morality and traditional thinking? Perhaps because Manual Training became associated with the Grange and Populists, who are (falsely) considered to be left-wing. Feels like an inadequate answer, but might be one piece of a larger connection. [Later: a more satisfactory answer.] = = = = = ** Footnote: I emphasize anti-southern-slavery because the Kansas expedition was financed by textile factory owners who wanted to see the West adopt their profitable form of northern industrial slavery, not southern agricultural slavery. In the end Bloodthirsty Madman Lincoln gave them what they wanted (along with 600,000 completely unnecessary deaths), but it didn't work out to their benefit. They forgot, as Yankee dickheads always do, that humans are not identical. Westerners moved west specifically because they were too ornery and loose to geehaw with either form of slavery.