Sunday, May 26, 2013
Phono-faradic therapy In my continual reading of 1901-era technology, I'd noticed considerable action in the area of 'electrotherapy', using small currents to help or cure various medical and mental conditions. Wasn't paying much attention to this; had always heard that it was quackery. A recent bit of science news described a similar use of small currents across the head (now called TCDS), with seeming benefit in mood and memory performance. Decided to look closely, and found that electrotherapy was emphatically NOT quackery, though some practitioners overstated its benefits. Early big-name neurologists like Erb and Duchenne were experimenting with electricity, and they had a precise understanding of how it worked. They knew which locations, which polarities, which current strengths to use for various conditions, how to stir up an inhibitory or excitatory response, how to dilate or constrict blood vessels. They were able to document positive results in many areas, including improved mood, sleep, and memory; helping broken bones mend; and clearing cataracts. Most impressively, they had a solid understanding of emotional conditions, and a properly humble view of their ability to fix or repair them. When electricity helped, they used it. When it didn't, they abandoned it. All of this was firmly established several decades before Freud came along. Well, what did Freud do? He replaced their direct and careful experimental results with a pile of non-observable and wildly complicated fantasies and epicycles. He replaced the long-standing (and probably innate) 'healer' model with a sequence of non-observable interactions THAT NEVER WORKED. Freud's system failed from the start. It's been exposed as a failure over and over, from within the psychiatric profession. But the Freudians are in charge, so any attempt to reassert facts is ruthlessly smashed. Modernists always commit the same crime when they infest any field of human endeavor. They toss out centuries of facts and experiments and functional theories; replace the facts with instantly disprovable theories, lies, abstractions and epicycles THAT DON'T WORK; then ferociously obliterate anyone who tries to restore the facts. You can see it in climate "science" with Michael Mann, John Holdren, Lord Stern; in politics with Marx, Betty Fried[m]an, Irving Kristol; in economics with Marx, Milton Friedman, and Paul Krugman; in jurisprudence with Louis Brandeis and Stephen Reinhardt; in physics with Einstein. = = = = = Polistra and Happystar will demonstrate one particular use of electrotherapy, described in this book on p.38. Caught my attention because it's a wonderful gadget with a wonderful name, because it supposedly cured tinnitus, and because it sort of resembles a modern impedance audiometer. The inventor, Dr Henry Houghton, was attempting to provide simultaneous physical and electrical manipulation to the auditory system. He added electrodes to a stethoscope, pushing electrons into the ears in pulses. The circuit is closed by an anode on the back of the head. Simultaneously, pulses of air are pumped into the stethoscope itself. He got results with one patient: 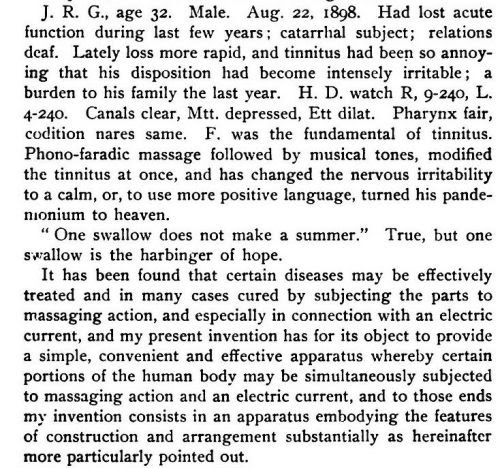 = = = = = Well, let's try it. Happystar is feeling low, oppressed by tinnitus and anxiety. 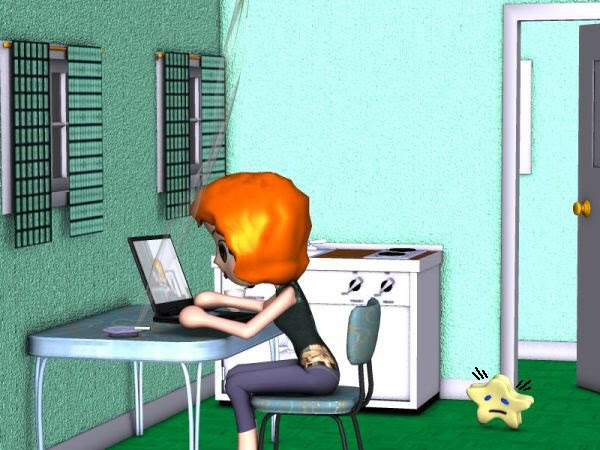 Polistra decides to try Houghton's Phono-Faradic** device. At lower left is the air diaphragm; in the middle is a magnetically-pulled pendulum or metronome that turns the current and the diaphragm solenoid on and off. 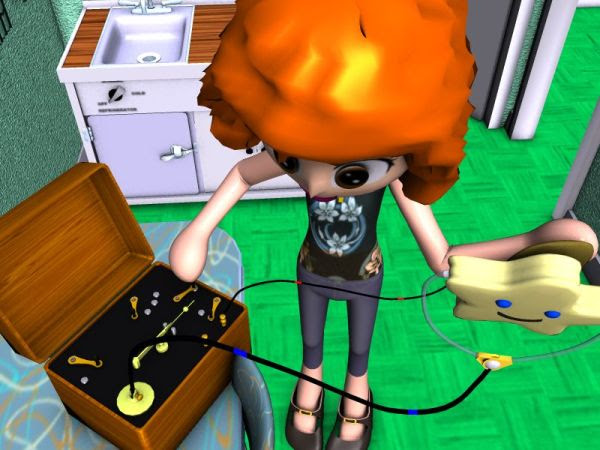 I'm tempted to build a modern electronic version, without the air pulses. A 555 timer switching a JFET current-source should do it. = = = = = **Footnote: Phono refers to sound, of course. The electrotherapists used faradic for treatments where a pulsed current flow was the important variable, and galvanic for treatments where a steady voltage gradient was the important variable. = = = = = Much later footnote: A new look at causes of tinnitus seems to validate Houghton's method.

According to their report, published in the Journal of Neuroscience, they have identified that the process called stimulus-timing dependent multisensory plasticity is altered in animals with tinnitus. They claim this plasticity is "exquisitely sensitive" to the timing of signals to a key area of the brain. The dorsal cochlear nucleus is where signals from the auditory nerve enter the brain. Neurons in this area integrate this auditory information with other sensory signals, such as touch. In tinnitus, when the sounds from the ear are reduced, the signals from the somatosensory nerves in the face and neck - which relate to touch - are amplified. Prof. Shore and her team are now developing a device that combines sound and electrical stimulation of the face and neck in order to return the neural activity to normal.