Tuesday, January 08, 2013
Neither snow, nor rain, nor like O-M-G Spokane finally got some serious snow yesterday. About 7 new inches, on top of 4 remaining from last week. Lots of shoveling, and I raked the roof just in case. 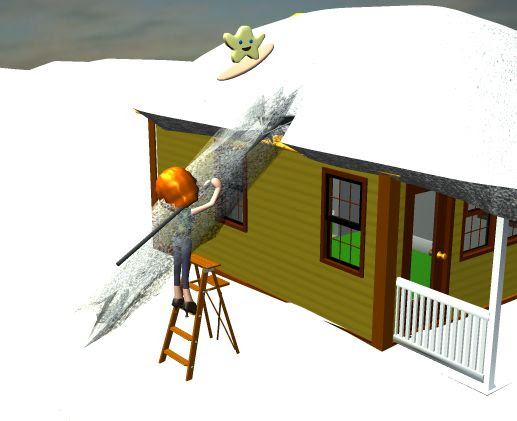 (Probably more obsessive than imperative, but I SHALL NOT have another expensive ice dam. Never again!) = = = = = Winter may stop the mailman nowadays, but it doesn't stop the bath-salts elite!

A Spokane couple got quite the surprise on their doorstep this weekend. They woke up to find a man trying to break into their home, but that was just the tip of the iceberg. "Once we saw the image we were like O-M-G, I couldn't believe my eyes," Dianne Lavalley said. "It was 6:41 in the morning on Sunday and the dog was barking like crazy," Dianne said. A man was trying to break into their home. The man quickly took off though and the Lavalley's didn't get a good glimpse of him but when they went back through their security camera, they saw a lot more of him than they expected. "We were just shocked when we first found the image, it was shocking that there was actually somebody there with their pants on their ankles," the couple said. ... The suspect is described as a white man, in his 20's, about 5'8'' to 5'10" and thin built. He was last seen wearing a two tone jacket, dark pants and a stocking cap with a fuzzy ball on top.

One on top and two below. Which brings us to: = = = = = Next day: Looks like Mr Fuzzyball has been caught. He broke into an apartment and stripped, and the cops came in time to grab him. Mist Fuzzyball he gon have fiiiiiiiine time in jail. Hey Mist Fuzzyball, fuzzy me banana, daylight come and me wan go home. Six foot, seven foot, eight foot BUNCH! Daylight come and me wan go home.