Thursday, January 03, 2013
Could we return to dollar coins? The treasury is pushing again for dollar coins. My initial response was strongly negative, probably because I don't want to carry ugly satanic Communists** like Susan B Anthony in my pocket. But I've recently been persuaded that 'moving coins upward' would be a good idea. Eliminate pennies and nickels, round off prices to the nearest dime, and make practical and attractive dollar and five-dollar coins. In other words, move the sequence of metal currency back to 1950s standards without altering the exchange rate of the dollar. We would end up with coins for the same range of 'daily purchase' values as in 1950. You could buy a gallon of gas or a bag of groceries or a fast-food meal or a movie ticket with coins. What persuaded me, and why do I say 1950s standards? Here's why. Been watching the few available episodes of 'Martin Kane', an early 50s detective show. Not recommended for plot or dialog, but the acting is excellent... especially since the show was produced live, requiring quick recovery from missed lines. Following radio tradition, advertisements were a seamless and inextricable part of the show. The sponsor was US Tobacco's line of pipe mixtures, so the main characters had to smoke pipes, and had to drop into the tobacco shop for refills and gossip twice per episode. (This probably engages my positive attention more than other products because I gave up the pipe three years ago and still miss it!) The tobacco shop has an interesting 'commercial tool' that helps to establish a personal business relationship. It's a simple tool that works with a coin-based transaction but wouldn't work with paper currency.

Just a dish, but a dish with historical resonance. Cash on the barrelhead, cash on the nail. A long tradition of transparency, enforced by placing coins in a bounded and clean location where buyer and seller can verify the transaction. In 1951 these transactions were possible because American coins still had a useful value. The pouch of pipe tobacco cost 15 cents, a dime and a nickel. Present prices are ten times 1951 prices, so a similar product would now be bought with a dollar and a half-dollar. (Actual tobacco prices are much higher because of sin-taxes, but that's separate from general inflation.) So a 'practical revaluation' of coins would bring transactions back to a more physical level, which humans can understand. Here Polistra holds the present sequence of coins (leaving out the quarter to make the math a little simpler) and Happystar holds the revalued or inflated sequence. 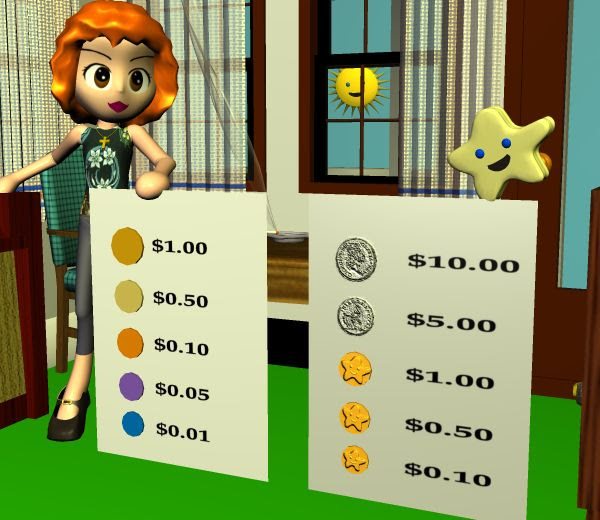