Friday, January 04, 2013
Big county / little county My attention was caught by an article on population decline in the Southern Baptist denomination. Runs contrary to most trends, and I wondered why. In recent times, religions that stick to their scriptures and principles are gaining, while religions that go along with Satan are failing. I'd always pictured SB as one of the former, but apparently they're starting to slide into modern immorality after all. (I knew they had surrendered to the Carbon Cult, but wasn't sure about the other modern ratshit.) Needless to say, all the comments on the article are encouraging SB to slide even faster, to "join the modern world" and rejoice in sodomy, buggery, carpet-munching bullbitchery, amorphoditism, and baby-killing. I started looking for maps of growth among various denominations to see if my overall impression was still valid. For instance, are Mormons and Muslims starting to lose adherents as well? No, they're not. But in scanning the maps I noticed something else that I hadn't seen before. Take this map of growth among Muslims, from the 2010 US Religious Census.... 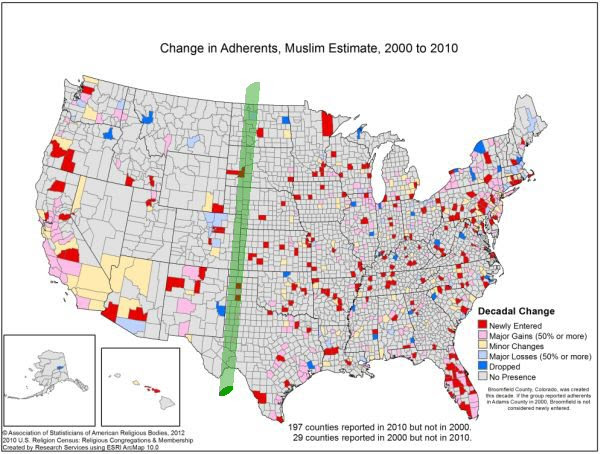 Sure enough it shows growth, but all of these maps also bring out a distinct line between big counties and little counties. The line (which I drew in green) runs straight north and south. It agrees with the Kansas/Colo boundary, but cuts across other boundaries. It doesn't agree with the relevant geographical line, either. The 'dry line', which I've discussed before, is the real E/W divider of climate and geography, and runs about 200 miles east of this county divider. I've always been a map freak; was reading and drawing maps before I was reading and writing text. I've always known that the western states have bigger counties than the eastern states, but for some reason this divider never grabbed my eyes before.  ¶ 8:37 AM