Friday, April 20, 2012
When you control the language A new calculation of the motions of nearby stars finds that the bizarre hypothesis of 'Dark Matter' doesn't work.

The team based their findings on the motions of more than 400 stars up to 13,000 light-years from the Sun. From this new data they calculated the mass of material in the vicinity of the Sun, in a volume four times larger than ever considered before.

"The amount of mass that we derive matches very well with what we see - stars, dust and gas - in the region around the Sun," said team leader Christian Moni Bidin, from the Universidad de Concepción, Chile. "But this leaves no room for the extra material - dark matter - that we were expecting. Our calculations show that it should have shown up very clearly in our measurements. But it was just not there."

Hmm. Nothing needed but OBSERVED AND MEASURED STUFF.

But our "scientific" establishment no longer practices real science. Only the most bizarre and anti-scientific hypotheses are considered to be normal and expectable. "Scientists" spend their lives whoring after the wildest and most fantastically counter-factual shit, and ruthlessly silencing every actual fact. Their only standard is status and fashion. If the counter-factual shit is high-status shit, we must spend trillions of dollars and kill millions of people to "prove" it. Just like Paris Hilton or the Kardashians, except Hilton and the Kardashians don't kill anyone.

Note the language in the headlines: 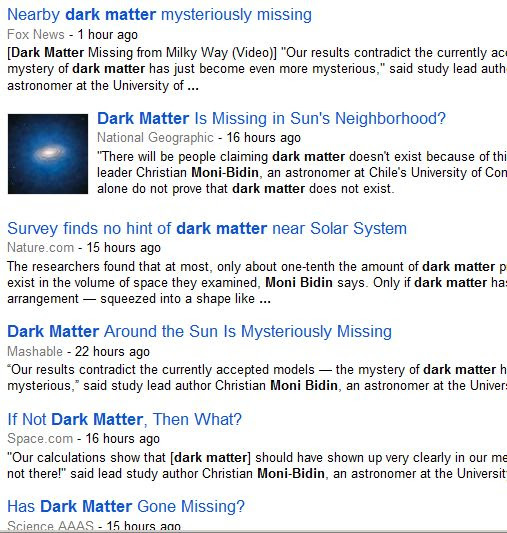