Friday, April 20, 2012
Was Bell working on television? Still running through old Google Books looking for details to use in digital models. Came across an issue of Bell's quarterly 'Journal' from 1925. Holds a variety of articles about the system's progress, finances and research.

The research section includes a couple short articles about hearing by Fletcher. This wasn't a surprise; working around speech and hearing I've often used Bell's abundant information, and Fletcher's acute observations are still a foundation for current perception research.

But these two items did surprise me: 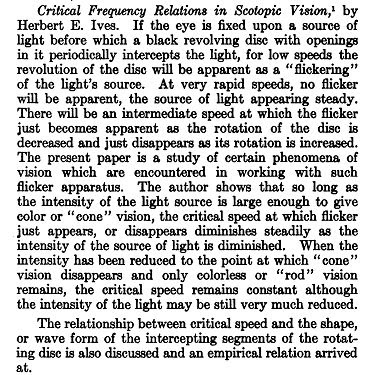 Sure sounds like Ives was working on a television system in 1925. If Bell had proceeded along the lines implied by these two summaries, they might have reached a color system with something like an LCD screen. They got scooped in '27 by Baird at BBC, then by Zworykin at RCA. I presume they gave up the quest.  ¶ 5:48 PM