Wednesday, April 11, 2012
Mexican influence On Point featured a lively history of Mexican food in the USA, with some surprises about its early popularity. Callers narrated their first experience with Mexican food, which pinged me into a memory that was nearly lost.....

I'm pretty sure my mother served canned chili and canned tamales, but she was a terrible cook and everything was the same tasteless mush with different names.

Around 1960 we went out several times to a fairly genuine Mexican restaurant in a little stucco building at Pottawatomie and Manhattan Avenue, next to the Hunter's Island bridge. I'd bet the place had been a just-outside-city-limits roadhouse in earlier times. The interior was dark and grimy, but the food was an absolute epiphany; especially the chili, which was completely unlike anything we had at home. The gustatory equivalent of suddenly seeing in sharp color after a life of blurry B&W, or hearing Schütz after a life of Lawrence Welk.

When I started cooking for myself in the '70s I quickly figured out how to make chili-like concoctions.

Through the '90s and '00s (pretty much my TV-enslaved Republican period) I was trying to eat in a more carnivorous style. Now that I've finally come back to the older pox-on-both mode in thought and the older meatless mode in food, I've also returned to the sensations of that Pottawatomie chili.

They say addiction is a form of nostalgia: you're always trying to recapture that first puff, that first beer, that first love.

By that standard this is undoubtedly nostalgia but it's not addiction. Every spoonful is just as satisfying as the original. 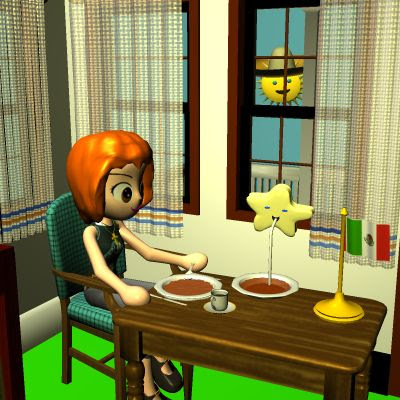 Artistic note: Logically speaking Mr Sun is the one cartoon character, among all conceivable characters, who doesn't need and can't use a sombrero! (How can it protect him from the sun?) But I like the way it looks, so art overrules logic. = = = = = Later: A better map here.