Turns out, though, Henry didn't originate the trend. Around 1901 there was a lively movement within industry and ... AMAZINGLY ... also among academic economists!!!! ... to restore the human element to work and business.

I bumped into this accidentally while looking for some detailed pictures of 1901-ish electrical instruments as sources for digital models. Looking for Weston galvanometers, ran across 'Social Economics of the Weston Instrument Co.' This little 1905 pamphlet described the plant and working conditions of the Weston Co, toward this purpose: 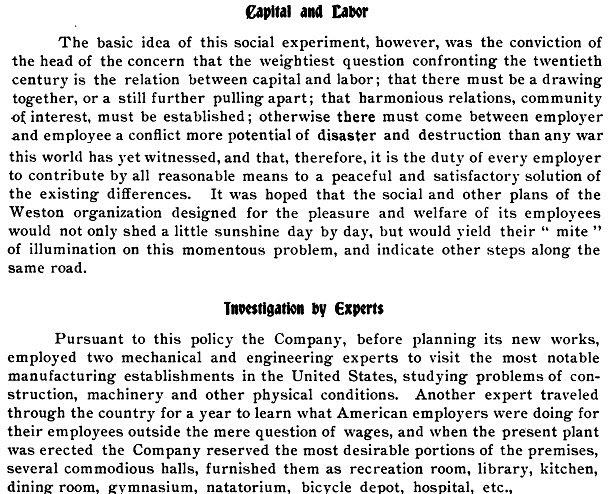 Caught my attention. Looked further, and found quite a few similar industrial statements and a whole branch of economics that bloomed around 1900, then apparently died. For instance, Gunton's Principles of Social Economics, from 1891. 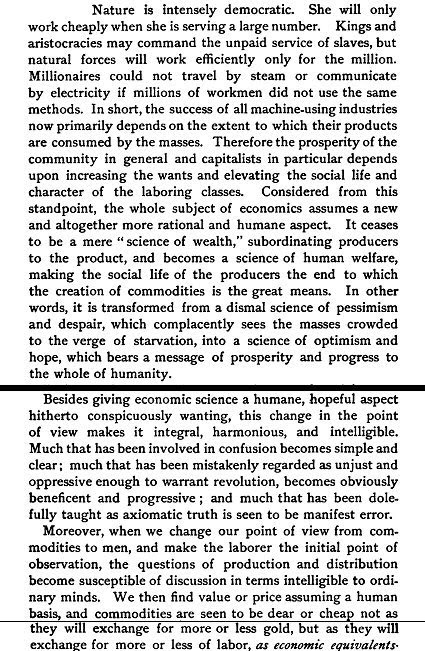 Later, Gunton shows that Smith's "invisible hand" is fully illogical, and begins to lay the foundation for an employer's regard for his workers:

Henry's assembly line workers came from the poorest and least skilled segments of the population, and his Sociology Department trained the workers and their wives in those basic notions of hygiene. Now, of course, Die-Versity prohibits us from assuming that poor people need training, and Capitalism prohibits us from spending any money to improve their lot. So the poor have returned to the condition described by Gunton. The only difference is that TV and McDonalds make it much easier to avoid fresh air, sunlight, exercise and wholesome food.

Social Economics marked the end of Gilded Age v 1.0. The application of Social Economics by Ford, E.W. Marland, and many others led to America's true Golden Age, the period when an ordinary man could support an ordinary family in a civilized way, the period when both employers and workers were trying to advance the interests of the working man in order to maintain prosperity and stability for all.

After 1980 we abandoned Gunton and Ford, and suicidally returned to the Gilded Age principles that had so dramatically failed before. Now a few lonely economists (eg John Médaille, Yves Smith) are attempting to rebuild a more humane view of labor and capital. Maybe they don't need to start over from scratch.......