Sunday, April 15, 2012
Cursive formants Nice story in today's Spokane paper about the fading of cursive, and some attempts to bring it back.

One comment from a teacher at a Catholic Montessori school struck me as perfectly beautiful. It's just my sort of idea and I'm embarrassed that I'd never thought of it!! (I discussed cursive last year but didn't make this wonderful connection.)

“Cursive writing better corresponds to the nature of the language,” [Immaculate Conception teacher] Temple said. “It shows children immediately that words are unities, not simply groups of disconnected letters; it shows that sounds combine to form precise and definite words, which in turn represent ideas.”

We don't form speech from separate letters. Each word is a continuous flow, and the things we call 'consonants' are not distinguishable at the moment when they happen. Instead, our ears distinguish between the various 'consonants' by the shaping of frequencies in neighboring vowels. (Discussed earlier here.)

A quick demonstration. I spoke the meaningless word 'abagada' with as much consistency and flatness as I could muster. The waveform is below, and the spectrogram above. (Click here for the awful sound.) 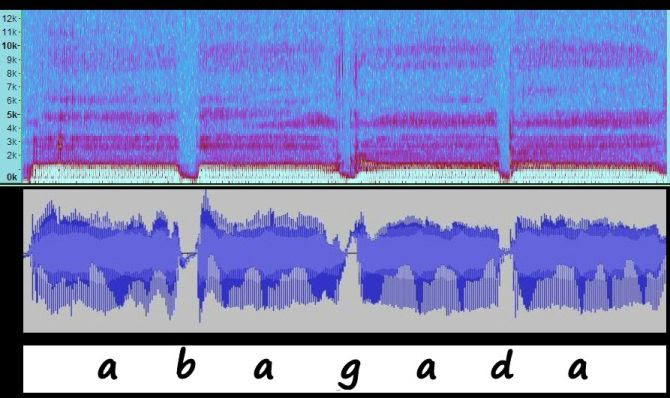 Spectrograms show the frequency patterns vertically; where the red is denser, that frequency was emphasized more by the shaping of the mouth at that moment. Focus especially on the range between 4k to 6k cycles per second. Our ears actually sense the difference between b,g,d by reading the frequencies in this range as they slide up and down, appear and disappear. Note how each shape is present both before and after the pause that marks the 'consonant'. Our ears get very little information from the actual pauses, except that we may distinguish voiced (b,g,d) from voiceless (p,k,t) by the length of the pause.

There's never a dull moment; the tongue and lips are always moving, so the frequency emphasis is always changing, always transitioning smoothly from one shape to the next.

All four vowels are written as a, but in fact each one is quite different, carrying the base formant pattern for 'ah' along with the constantly changing transitions between the momentary consonants.

Muscle memory. Experience. All you need.