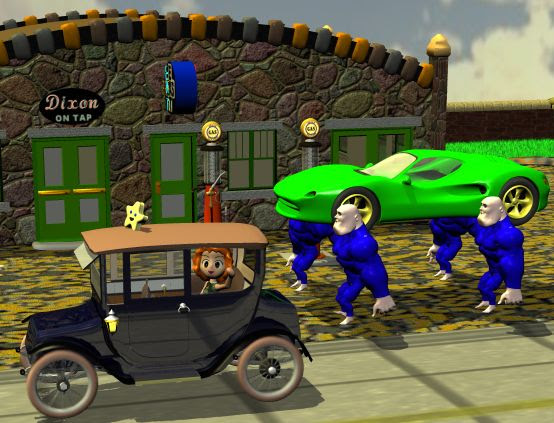 A super-modern Tesla electric roadster shows off its super-modern propulsion system. Occasionally the Tesla is propelled by electric motors, but if you mistakenly allow its batteries to discharge, it becomes a Brick, absolutely immovable and unrollable and unrechargeable. You have to haul it to a Tesla dealer and spend $40,000 (uninsured, unreimbursed) for new batteries. This is apparently part of the aristocratic Gaian thrill you get in return for your original $170K investment.

Meanwhile, Polistra hums sedately past the Brickmobile in her 1910 Detroit Electric. The Detroit has roughly the same short range as the Tesla, but lacks the super-modern super-digital Brickification feature. If you discharge its primitive batteries completely, you just have to recharge them. Dull. Analog. No more exciting than refilling an empty gas tank.

The picture was inspired by this delightful story. (Link leads directly to a PDF.)

Outline of the story: A remote Adirondack hunting lodge had been lighted since 1924 by an Edison DC generator outfit using 80 nickel-iron storage batteries. The system had been used fairly steadily with spotty maintenance. When the lodge's owners decided to sell, they offered the antique electric stuff to people who would preserve it or display it, rather than discarding it.

The authors of the story heard about the batteries, went up to the lodge, took the system apart, and brought the batteries down to their lab. Some cells still had electrolyte, some had been empty for many years.

Best part of the story: The authors flushed out and refilled the cells, and every single one still worked, still charged up to specified voltage, still discharged smoothly.

Edison had advertised his nickel-iron batteries as lasting a hundred years, and he was right!

Nickel-iron cells are no longer made in America ... [Didn't really need to say that, did I?] ... but one Chinese and one Russian company still make them. Aside from the obvious advantages (not turning to Bricks when they discharge, and lasting a century) nickel and iron are common minerals in plentiful supply. Contrast with the Tesla's laptop batteries, requiring rare Lanthanide minerals found mostly in China.

Later: Another testimony to Edison's nickel-iron cells. When car collectors restore Baker Electrics from around 1910, they don't need to replace the batteries! After a full century the nickel-irons still work perfectly. = = = = = Much later addendum, Jan 2013: Looks like the gov't is considering a rule that electric cars must emit sounds. As a perpetual pedestrian, I love this idea. I've been vastly more careful and 'optical' since I got whacked by an SUV in 2008, but I still rely on hearing for a general sense of approaching cars. Been fooled several times by quiet Priii and Leaves. Electric cars should constantly emit characteristic tunes, like the ice cream man with his Entertainer Rag (aka the Sting tune). The Tesla Roadster needs to emit the following song over and over and over and over: Oh give me a place where the wind turbines race, where the birds and the bats die and scream; where subsidies pay for my Latté Grandé, and exploded dams kill human dreams. Home, home is my range, where the volts charge my batteries quick, I can quietly roam, thirty miles from my home, then my Tesla turns into a brick.