Friday, October 29, 2010
A practical wind scale In the very windy year of 2010, enduring idiotic TV weathercasters who are stuck in linearity and thus don't understand the difference between breezy, windy, and dangerous, Professor Polistra has been thinking about the need for a human-oriented scale for wind velocity.

There is a Beaufort Scale for sailors, strictly for sea characteristics. And there are several scales for hurricane and tornado strength, but nothing that deals with sub-lethal wind speeds on land. 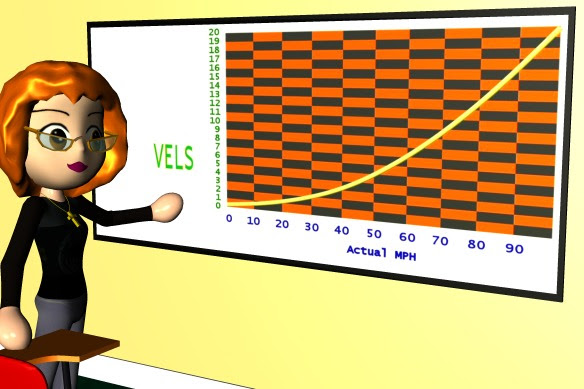 Professor Polistra has designed the Vel scale to capture this reality.

Vels are based on wind force in pounds per square foot, adjusted slightly so that 20 Vels matches 100 MPH for convenience.

The Vel, like the Bel, is linear with respect to real effects, especially in the lower end. From 0 to 1 is the range where nothing moves. From 1 to 2, leaves and twigs move. From 2 to 3, small branches move, and so on.

The graph on the blackboard runs all the way up to 100 to make the shape and math clear, but Prof P really intends only the lower part to be used, 0 to 9 Vels reaching 70 MPH. Beyond that you're in hurricane territory.

Another advantage of the Vel scale: again like Bels, it's a "universal language", same number for same wind regardless of English or Metric measure.

Later: Oops.... turns out Prof P has more or less re-invented the existing Beaufort Land Scale. The precise conversion is a new idea, though.  ¶ 8:02 AM