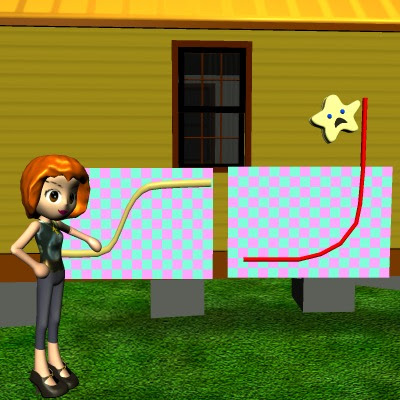 Polistra and Happystar set up the point for us. On the left is the typical 'sigmoid' graph of a system with negative (good) feedback. An externally imposed change triggers a counterforce by internal error-correcting loops, leading to a smooth plateau at a new equilibrium. (Often a real system will return later to the baseline, but that's not on this graph.) On the right is the typical 'hockey stick' graph of a system with positive (bad) feedback. An externally imposed change is amplified by internal effects, leading to an 'avalanche' of runaway growth or runaway heat, and often disaster or death.

Well-known truism: A Big Thinker creates a handful of important and valid Big Ideas. His followers then degrade the Big Ideas into a movement that is either trivial or deadly.

Polistra has often noted this tendency with Darwin. Old Charles was a Christian who viewed his observations and discoveries as evidence of the beauty of God's creation, though he seems to have turned more doubtful later. Now his followers are using his name as a weapon against Christianity and against civilization. The Endangered Species Act is the sharpened edge of this weapon, running precisely opposite to Darwin's own theories while using his name as an icon of atheism and "science".

Here's the critical difference: Darwin was a Steam Age man who understood feedback. His theory says that life continues to exist on earth because of innumerable error-correcting loops. When local conditions change beyond the point where a species can adjust internally, the species dies (locally) and another species moves in. When one species grows too numerous, its predators will move in and eat it down to normal.

The Endangered Species Act is designed to break up those loops by arbitrarily preventing the natural die-off of some species, thus preventing the natural invasion by others. And the feds have taken it one step farther into reverse (positive) feedback, by re-introducing species into places where they naturally disappeared.

We can see a parallel abuse of an original idea with James Lovelock's Gaea Hypothesis. Lovelock wasn't really proposing anything new; he was simply observing the same thing Darwin observed on a larger scale. The earth has an incalculable number of feedback loops. Every cell, every tissue, every organ, every complete animal and plant, every family and culture, runs on negative feedback. When a loop breaks or turns bad (positive) the result is fever, disease, cancer, insanity, death. The oceans and atmosphere also run on negative feedback, always maintaining homeostasis of chemistry and homeostasis of temperature within narrow bands. External events perturb the equilibrium at times: volcanos, meteorites, earthquakes, oil spills, bombs. After a time Nature almost always manages to heal the damage, often in ways that remarkably resemble the healing of an injury to an animal.

Lovelock's treatment of Nature as a sort of single animal was thus appealing and metaphorically useful if not strictly accurate.

The neo-Gaians, such as the carbon cultists and their allies the genocidal Deep Ecology fanatics, have adopted the words but reversed the point. The neo-Gaians believe in positive feedback above all. They see every change as leading to a catastrophic hockey stick, with effects piling on effects. Error-correcting feedback is specifically excluded from all of their calculations, even though ALL FACTS AND EVIDENCE, repeat ALL FACTS AND EVIDENCE, repeat ALL FUCKING FACTS AND ALL FUCKING EVIDENCE, show that Earth's temperature and chemistry are strictly regulated and strictly homeostatic.

Unlike Darwin, James Lovelock is still alive and active, and his authorized website tries to claw back some territory for rationality. Though he buys the AGW theory wholeheartedly, he is a ferocious advocate for nuclear power. No hippie shit for Lovelock.

Update 4/23/2012: Lovelock has taken another step toward disavowing the movement. Won't matter much, because he doesn't control any budgets. Nothing will change until WORKING professors with granting authority explicitly turn away from the bad theory. That won't happen until no more money is available for grants.

For reference, Polistra has also discussed the hockey-stick connection with stock market bubbles.

It's always the same with our modern reverse-brained elites. They literally cannot conceive good (negative) feedback, which is the sole path to survival; they can only imagine bad (positive) feedback. In some cases (Global Warming, Malthus) they hate positive feedback, and in others (Wall Street) they love it, but in all cases they insanely assume it's the way things work.  ¶ 10:29 AM