Monday, April 06, 2009
Longest winter This was the snowiest winter on record for Spokane. Probably not finished either, considering that the previous year had a little snow in June.

December and January were pure hell, a slow-rolling disaster with two dozen business buildings totally destroyed. As I walk through the neighborhood now, I'd say 1 out of 5 houses show some degree of external damage, ranging from stained siding to busted-off gutters and eaves to dangerously dippy roofs, presumably indicating bent or cracked rafters. 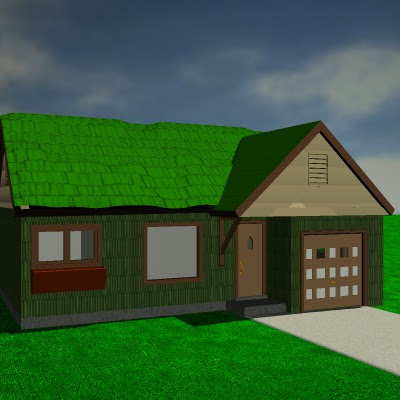 I'm sure the dippiness is new, because I've walked the same route at least a hundred times and I'm a careful observer of houses. Surprisingly the dippiest roofs are on the nicer 1960's ranchers with some architectural charm, like the model I've "drawn" here. The drab early-50s cookiecutter units are not damaged. I would have guessed the other way around: seems like the older and cheaper houses, many of which are poorly maintained rentals, would suffer the most. Perhaps the older ones were built with a better grade of wood?

My own miniature hovel kept a straight roof (I'll pretend my diligent raking helped) but it was internally damaged in January by an extreme ice dam on the back side. The ceiling, floor, and paneling in the laundry room got wet and stayed wet, resulting in stains, warpage and rot. I called the insurance company and they remodeled the room during February. Must admit I got the better end of the deal, because the ceiling and floor were already damaged to a lesser extent by previous ice dam events. The remodelers couldn't manage to replace only the sections that were ruined by this particular dam, so they gave me a nice new ceiling, wall and floor.  ¶ 4:04 PM