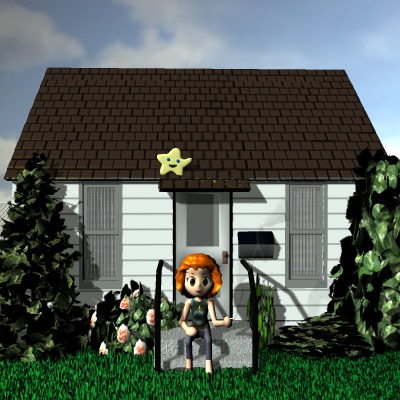 I've used this digital model of a house in a couple of cartoons. In fact it's an accurate model of my own real-life hovel, all 520 glorious square feet of it.

Next month I'll make the last mortgage payment (Huzzah!), so this feels like a good time to pay tribute to a humble servant that has done its job beautifully.

Zooming out a bit:

Most Western towns grew in a series of discrete bursts. If you know architectural styles, you can read a town's history like counting the rings in a tree. The original townsite, down by the river or railroad, fills up quickly then sits around waiting for the next boom. If there is no next boom, the town usually fades out.

In most surviving towns you'll see a 1920's zone representing the Coolidge expansion, and a 1950's zone where the returning soldiers used their GI Bill mortgages. Aside from that you'll find a record of local events like a steel mill, an army base, or an oil-drilling boom, each in its own subdivision, with similar houses within each area.

Spokane didn't work that way. It blasted out hugely and richly at the very start (silver and gold mining, railroads), then slowly and steadily filled in afterward. A 1920 street map looks very much like the current one, so you can't find major zones or rings of growth. Thus every area holds a random mix of 1910 Sullivanesque mansions, 1920 bungalows, 1930 colonials, 1940 emergency quickies, 1950 mass-produced GI modules, 1960 Wrightish ramblers, 1970 bi-levels with awful beaverboard siding, 1980 pseudo-Palladian monstrosities, and 1990 Seven-Gables monstrosities.

This little house lives in a subdivision called Boulevard Park, platted in 1918 around an electric interurban line that never materialized. The interurban was meant to run northwest toward Loon Lake, so Boulevard Park is a five-block-wide diagonal strip. Boulevard Park didn't thrive at first; only a dozen 1920 houses are still visible. It must have been mighty rural for a long time. The next scattering of houses are a few late '30s colonials, then the 1950 GI modules pretty much saturated the land.

Based on a little research and a lot of guessing: This little house was built in 1943, when building a new house was technically illegal. 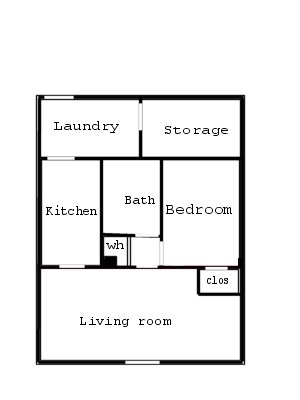 The basic square (20 by 20) is identical to a plan found in some 'kit house' books, and is built plainly and solidly. I don't see any definite signs of kit-itude (no Aladdin or Sears indications), but there are a dozen similar houses around this quarter of town, so it's a fair hypothesis.

It was placed on the back of a corner lot already occupied by a '30s colonial; the owner of that house was listed as a contractor in the City Directory, so I'm assuming he built this place on his own lot to make some rental money from war workers, and later separated the piece of the lot.

The neighborhood must still have been semi-rural at that time, because the house had a septic tank and an oil heater.

The first occupants were Jim and Bertha Willis**. Jim died in '55, then Bertha either died or moved in '61.

The back section (laundry and storage room) was crudely tacked on in 1956. The Directories show only sporadic occupancy until 1968, at which point this house simply disappears from the books and never returns. Was it condemned at that point? Possibly, because it does show signs of a long vacancy.

In 1978 a local realtor bought it. Using Carter's 'weatherization' subsidies, he replaced the wiring and plumbing and added electric heating, aluminum siding and metal storm windows, then rented it out. In 1991 he retired from landlording and put it up for sale.

I moved to Spokane in late '90 to take a programming job at the local branch of WSU. Tired of apartments, I hoped to finally buy a house. Unfortunately my timing was poor. A whole pack of Californians had discovered Spokane at that same moment. They cashed out their wildly overvalued million-dollar GI modules in LA, and bought better houses here for 80K. So my hopes of buying a decent-sized house for a decent price evaporated, and I had to rent an apartment and lower my sights.

The delay was probably a good thing, because it gave me time to learn which parts of town are safe. Friends advised me: "Pick a bad house in a good neighborhood, not vice versa. You can fix a house but you can't fix a neighborhood." Amazingly I followed that advice, and not-so-amazingly it was good advice. The other houses available in this price bracket were nicer or larger than this one, but they were in gang-infested neighborhoods.

So in the end I didn't get what I dreamed of, but I got exactly what I needed. Low expenses, convenient location (walking distance to groceries and WalMart) and relative security.

At this point I've lived in this little house for [approximately] a quarter of its life and a quarter of my life. It will never be featured on HGTV, and it was probably not intended to last very long, but its basic design and construction have held up through six decades of bad weather and bad maintenance. So far it has only given me two expensive problems (septic tank, replaced by a real sewer connection in 2004; water heater failed two weeks ago), and in both cases it waited until I could afford the money and time to fix them.

Does my love for a minimal house make me a CrunchyCon? Maybe so. I frankly don't understand how Livin' Large became congruent with conservatism; Coolidge wouldn't understand it either. = = = = = ** 2014 update: Accidentally found Jim and Bertha in the 1940 Census while searching for something else. Traced them a bit further with obituaries. Jim was born in Missouri a few miles from where my grandpa was born. More Census searching (Mo ED 46-11) finds a pile of Willises and a pile of my relatives living in the same township. They were neighbors. Jim and Bertha moved to Spokane in 1909, and in 1940 they lived a few blocks south of here in a bigger and better house. That house is still intact, and I see it every day on my walks. Jim was 53 and Bertha was 51 in '40, which would make him 68 when he died in 1955. Bertha then moved in with relatives in the Valley and died in 1970. Jim was a mechanic with above-average income, so it's not obvious why they 'downsized' to this house in '43.  ¶ 9:34 PM