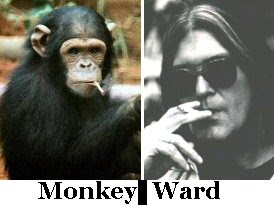 I'm not going to make a habit of using Photoshop here; lots of other bloggers do it better. But this was just irresistible.

Seriously, though, I wondered why WC makes such a point of strolling around in public with a cig. Academia is the modern* home of the bodily-purity code, and Ward knows his codes and ciphers better than anyone. A 'normal' professor who was seen in public with the Devil Weed in his mouth would be banished, regardless of his leftist credentials.

*Of course the original home of the bodily-purity code is a certain German political movement that began in the 1920's. The fact that Herr Schicklgruber was a vegetarian and environmentalist is neither ironic nor coincidental. Purity is the kernel of genocide.  ¶ 7:44 PM