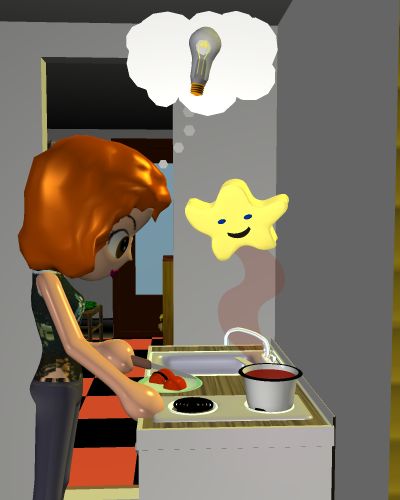 Lately I've been moving my diet away from canned and processed food and toward fresh and home-cooked. Result has been dramatic: My digestive system is working properly for the first time.

The inspiration for this change was one bowl of chili back in 1960. As I wrote before,I'm pretty sure my mother served canned chili and canned tamales, but she was a terrible cook and everything was the same tasteless mush with different names.

Around 1960 we went out several times to a fairly genuine Mexican restaurant in a little stucco building at Pottawatomie and Manhattan Avenue, next to the Hunter's Island bridge. I'd bet the place had been a just-outside-city-limits roadhouse in earlier times. The interior was dark and grimy, but the food was an absolute epiphany; especially the chili, which was completely unlike anything we had at home. The gustatory equivalent of suddenly seeing in sharp color after a life of blurry B&W.

Why was that one bowl of chili such a revelation? Every ingredient revealed its own taste and texture. Each piece of tomato, each bean, each bit of beef, communicated with my tongue separately, and the pieces combined to make a harmonious whole.

This week I'm trying to get rid of the one remaining canned element, the tomato soup; trying to replace it with fresh tomatoes.

As I was slicing a tomato, I realized that I'm simply following Polistra's main theme. From the start these scribblings have looked at various forms of modern tasteless mush, and pointed out the Pottawatomie Chili alternative. In most cases the mush is a fairly recent development; distinct ingredients were the rule before WW2.

The mushers tell us we can't go back. Nonsense. The old unblended version worked, and the new overcooked puree doesn't work. Humans haven't changed, and Nature hasn't changed. We can go back.

Everything in Nature is highly decentralized. Each cell, each tissue, each organ, each plant and animal, has its own boundaries and its own specific area of expertise and control. The higher levels are happy to let the lower levels run their feedback loops internally.

Engineering and programming teach us the same lesson. Global variables and rigid couplings are bad; keeping the loop, or the stress, or the resonance, inside a module is good.

Start with the Three Horsepersons of the Modern Apocalypse, as embodied in EU above all. Free trade, Die-Versity, and Global Warming pseudoscience.

Free Trade starts with a false assumption that "economic efficiency" is the goal of all economic activity. It then decides that the best way to maximize "efficiency" is to crunch all national economies into one massive economy. Result (and real goal) is massive enrichment of the rich and starvation of the poor.

Die-Versity starts with a wildly false assumption that all humans are identical, then proceeds to mash them together to prove the assumption. This works in a few temporary and unusual situations like a wartime Army, but it leads to chaos in most situations. Result (and real goal) is massive empowerment of the rich and constant violence among the poor.

Global Warming pseudoscience starts with three wildly false assumptions. (1) The earth is one unified blob with one average temperature; (2) This average temperature is solely and rigidly controlled by one minuscule component of the atmosphere; (3) Among the sources of this minuscule component, the only one that counts is industrial output of English-speaking nations. Result (and real goal) is massive enrichment of the rich and starvation of the poor.

And then there's the EU itself, so blazingly obvious that even the mushers are starting to admit it can't work! Rigid coupling makes the whole structure shake and crack when one element moves the wrong way.

Several other specific examples of mush:

Financial system, on many levels. At the institutional level, Too Big To Fail. At the monetary level, securitization. At the regulatory level, rigid coupling of SEC and banks.

Neocon imperialism. All humans are identical, which means they're all identical to the NYC elite. Thus the elite's morals and culture are the ONLY possible set of morals and culture. We must spread them to all benighted nations. We must destroy Afghanistan and Iraq so the identical human units in those identical countries can share the wondrous benefits of Betty Friedan and Manolo Blahnik and Graduate Queer Studies and Kim Kardashian. When Kim loses a fingernail, all must suffer the pain.

Mass media, working in sync with the above two. Every serving of drama, comedy and "news" is the same tasteless mush with different names. The people seen in these servings have different colors and costumes, and they seem to argue, but they all agree on everything important. Gay is good, imperialism is good, The Market is good, EU is good. Everything that tends toward distinct and recognizable pieces (separate sexes, separate religions, bounded trade, separate nations) is bad.

Admittedly, there are a handful of notable counterexamples, situations where more centrality would help. But these exceptions work toward the same overriding goal of chaos and collapse. In today's news, we have England's inability to cope with shortages and excesses of rain. Cause: Privatized water systems. Government has been wasting its money on Die-Versity and Free Trade and Global Warming when it should have been building dams and canals, should have been improving pumps and pipes.